Now, you have seen and heard everything! Civilian tanker drivers? Really? Well, to know more about the 10 crazy things civilian tank drivers have to follow, take this trip with us. Read more!

What comes to your mind when you see those big military tanks? Do you know that it is possible to own and drive a tank as a civilian? One thing that’s on the edge of insanity is buying and driving a military tank.

The laws for owning a tank in different countries varies and it is important that a civilian is aware of all the things you must know to own and drive a tank.

Apart from normal driving regulations such as seatbelt safety, there are particular tenets tank drivers must adhere to.  Not only should he/she know, but they must also familiarize themselves with it before purchasing a tank.

Tanks are heavy-duty military vehicles, but a civilian can drive, under the right circumstances

Below are the 10 crazy rules all tanks drivers have to follow:

10. Where can tanks be driven?

In the USA, a civilian can be allowed to drive a tank on public roads but this depends on the state they live in, otherwise, tanks can be driven on private property too. One has to be careful, especially when you are driving a decommissioned Abrams SEP, tanks can require up to 600 gallons of fuel to go just 300 miles!

There are not many places to safely drive a tank though

To drive a tank, a driver has to obtain a commercial driver’s license. This is very important considering how much a tank weighs, which can be more than 30 tons. The license the commercial driver owns ensures that the driver is skilful in operating a vehicle that meets extreme weight standards.

Large trucks with trailers are always affected by weight which also affects the vehicle, so imagine what a tank feels like. It can also be steered and brakes applied like other heavy-duty vehicles.

Every so often, there is a need to adjust brake pressure. You can just imagine what 30 tons of steel can do to the brake responses.

You need to be certified to drive this 30-ton monster or accidents will happen!

8. Guns and radios must be deactivated

Before a civilian can operate a tank, it must have its weapons load neutralized. But the gun may still be in use as long as the owner has a permit for it. Also know that the prerequisites for procuring such a permit are tough, and include lots of paper works as well as comprehensive background checks.

The tanks also come equipped with communication equipment which must be deactivated before the civilian makes use of it. Additionally, the large-capacity ammunition required for tanks is extremely difficult to buy and it is also under heavy official scrutiny.

In Nigeria, it would be almost impossible for a private citizen to get the necessary permissions.

Tanks are propelled to move by planet-sized diesel engines, whose sizes produce thousands of horsepower because of their weight. Therefore, if one is buying a historic military vehicle, because of the vehicle’s age, the tank may need to pass an emission test.

This varies from state to state. You can also check the laws surrounding the registration of military vehicles to be sure.

6. It is possible to drive a tank too fast

Tanks are generally known to be slow, but just because they are slow does not mean there is no such thing as going too fast. So all we are saying is that a tank driver can drive too fast.

The implication is that if not properly operated, the tank can spin out of control and lose its tracks. For example, when you drive a car through water, you are expected to not exceed 2 miles per hour and this is because it can result in drowning and can also cause serious damage to the engine.

If a truck also loses traction on loose sand, for instance, one is expected to stop applying power for that moment and ride out the skid until it regains adhesive friction. This example given is also similar to operating a road car.

For a tank, naturally, the danger is even more pronounced, hence the need for speed safety limits.

Go too fast with a tank, no, no, you are not in Fast n' Furious!

>>> You may find this interesting too: 5 things you do in sedans that should not be done in SUVs

5. Be prepared to fix a lot of city-owned and private property

For a tank driver that is duty-bound to drive their armour down the public streets, the tank driver has to ensure that the roads can accommodate the size and weight of the tank.

Tanks are big and if the road is small compared to the size of the tank, it can tear tarmac with its treads. If the military causes damage to private property, they prepare millions of dollars in compensation to affected private properties.

However, civilian insurance may not cover the damages, so driving on a public or private road may not be best for a civilian with bare-bones liability insurance.

You damage, you pay for it. Those are the tank driving rules

A civilian who wants to purchase a tank must also know how to care for it. To buy a tank, it is not wise to buy without at least a couple hundred thousand dollars at one’s disposal.

Tanks that were made long before and that are older than 25 years are called Historical Military vehicles and they cost more than a common road-going car from time to time by order of size.

So you can check out different websites that sell surplus military vehicles and the good news is that they are so easy to find. It is very important to choose a trustworthy vendor but be prepared to shell out six figures after taxes.

Cars cost a buck or two, so come loaded to own one

3. Tanks require a lot of maintenance

They build tanks for different purposes. So, naturally, they require a lot of attention and care. Tanks should be regularly inspected at least twice a month. This means checking the fluids, checking for leaks, and ensuring the instruments are fully functional.

A civilian’s tank may not go through such a harsh regimen as the military requires though.  For the military, the tank must be looked at before, during, and after each use. The military knows what’s vital for its vehicles, and likewise, it is paramount for a civilian to maintain his tank.

If you own a tank in Lagos, the first problem you will have is where to park in Lagos and the parking fees you would pay.

Assuming tank owners have suitable storage space, there is still the problem of keeping it safe from moisture and animals. Birds will build nests and start families if the space is large enough for them and mice will chew any wiring they come across.

This will only happen if the tank owner wants to turn his tank into a habitat for refugee critters. Their tanks should be covered at all times, and they should also be kept in a garage with slight contact with the elements.

If the diesel is left unattended for a short period, it will clog fuel lines because it will react with oxygen and form sediments. It is classified as a carbon-based petrochemical.

If it is going to stay for a long period, an addictive should be used to prevent clogging of the fuel lines. Also, condensation can build up if the cell fuel isn’t full. So, ensure that cell fuel is always full. If infested by water, the fuel can become mud and can clog the lines.

The general rule of thumb is to never let diesel fuel sit for longer than 30 days.

Video below shows what happens when a crazy driver steals an army tank: 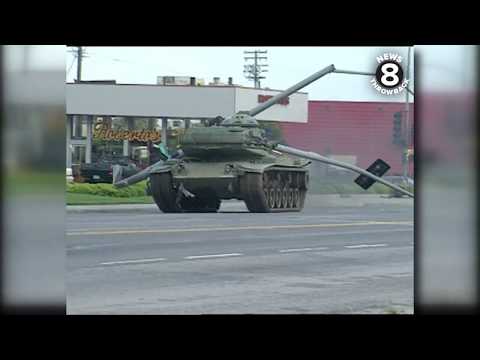 Tanks can also be legally owned by any civilian despite being the most fearsome military ground vehicle, as long as the civilian can abide by the rules. It is possible to own a tank if you take care of these things you must know to own and drive a tank.

Concerned motorists rescue woman who was convulsing on Lekki expressway