1. Toyota Venza 2010 model – An Interesting yet Practical Blend of a Crossover and a Wagon

The Toyota Venza 2010 is one of the most sought-after models in the Nigerian market. Interestingly enough, it is confusing to determine whether the Venza is a crossover or a wagon. While some auto journalists see it as the “Camry station wagon”, others deem it a new species of SUV. There have been customers who seek more room and flexibility than the Camry sedan but find the Highlander too bulky. And there comes the Venza. Its creator, Toyota, describes it as a perfect hybrid of a stylish and comfortable passenger car and a flexible SUV.

Although other rival brands have come up with more fuel-efficient models such as the Subaru Outback, more stylish such as the Ford Edge and Nissan Murano, the Toyota Venza 2010 still proves a classic by its consistent presence in the most popular car ranking rated by Nigerians. The Toyota Venza is fonded by Nigerian drivers with its confident V6 engine and fit-for-the-need technology features, including 6.1-inch touchscreen with upgraded infotainment features and a rearview camera. The larger cargo bay is achieved by foldable rear seats and passengers won’t be struggling for headroom or legroom from both seating rows. Besides, the Venza’s tall doors and low step-in height allow the most mobility-challenged shoppers feel convenient. Let's explore more about this interesting vehicle through our review of the Toyota Venza 2010 model. 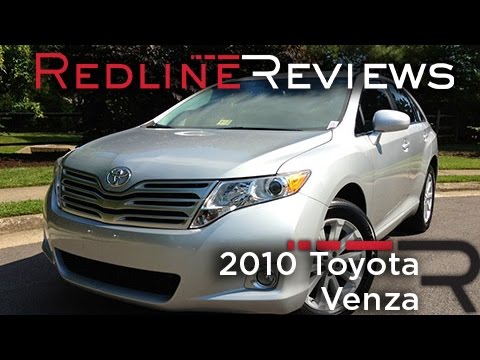 Before going into the detailed review, please see the brief specs for Toyota Venza 2010 variants below:

The Toyota Venza 2010 is characterized by aerodynamic sculpting and smooth, fluid lines. Overall, the Venza is slightly lower and shorter than its crossover counterparts. From the front view, it owns a high, wide grille flowing into a set of flame-shaped headlights which accentuate its overall wide stance. The headlamp clusters comprise a combination of lamp types, creates a nice contrasted look with the simple, isolated fog lamp below.

From the front, the Venza owns a high, wide grille flowing into a set of flame-shaped headlights which accentuate its overall wide stance

In profile, the 2010 Venza feels sleek and modern thanks to the low rocker panels and narrow doorsills which give the vehicle a car-like look rather than an SUV. Retaining the FT-SX concept vehicle inspiring its design, the wheels are positioned out at the corners of its body and nicely snug the wheel wells.

In profile, the Venza feels sleek and modern thanks to the low rocker panels and narrow doorsills which give the vehicle a car-like look rather than an SUV

The 20-inch wheels coming with the V6 variants suggest surefooted driving, be it sporty rides or winding roads. The five-spoke wheels present a bold three-dimensional feeling while the standard 19-inch, 10 spoke wheels give a clean, machined and high-tech look.

Rearward, the sporty feeling is further stressed by the S-shaped tail lamps which finally convey the impression of a modern, smart and practical car

Rearward, the sporty feeling is further stressed by the S-shaped tail lamps which finally convey the impression of a modern, smart and practical car. More importantly, the Venza 2010 design represents Toyota’s long-view DNA, which means that none of the Venza’s visual elements are likely to become outdated for years ahead.

From the inside, the Toyota Venza 2010 interior embodies a distinctive yet functional cabin. The dashboard receives a bold design with the shifter charmingly integrated into the center stack. The room below is generously provided for a large console bin, fat cup holders and smaller pockets to store small items. However, the materials chosen for the Venza is mediocre with a mix of smooth and textured plastics and false wood details. Pleasing as the look is from a certain distance, the quality is not felt on a closer inspection.

A little source of frustration is the small virtual buttons that sometimes impede the modest 6.1-inch touchscreen and require a tiny brainstorm to figure out. The fact that the satellite radio and the FM/AM presets can be mixed and matched is appreciation-worthy and the presence of app integrated into which comes standard on XLE and Limited models offer a bunch of conveniences including Pandora Internet radio, movie ticket and restaurant table reservation. Basic controls come user-friendly with clearly marked buttons and big knobs.

More padding could be used on the front seats as it feels not exactly comfortable on long drives. Comfort-seeking riders may prefer backseats which offer spacious legroom, combined with reclining adjustment. Families will also find 2 full sets of LATCH connectors are available for child seat mounting. The Venza provides decent cargo back there, measuring a spacious 36.2 cubic feet. Folding down the rear seat and 34 cubic feet more will be released for bulkier stuff.

The Venza provides decent cargo back there, measuring a spacious 36.2 cubic feet

The Toyota Venza 2010 model comes in total 2 trim levels, each of which corresponds to an engine capacity. Standard on both trim levels are:

Opting for the V6-powered trim level, customers will get 20-inch alloy wheels as the only addition.

A little source of frustration is the small virtual buttons that sometimes impede the modest 6.1-inch touchscreen and require a tiny brainstorm to figure out

The Toyota Venza 2010 is quite basic when it comes to safety features. All trim levels get antilock brakes, traction and stability control, front side airbags, a driver knee airbag and full-length side curtain airbags, rearview camera and hill start assist, however parking sensors is found only on the Limited. Other more advanced safety technologies offered by rivals such as forward collision mitigation, rear cross-traffic alert and blind spot monitoring is regrettably absent on the Venza.

Since the Toyota Venza has been discontinued, you can find a used one at prestigious dealers or online platforms. Depending on the condition and mileage, Toyota Venza 2010 price in Nigeria is between N5 million and N8 million. You can also visit our website naijauto.com for thousands of Toyota Venza 2010 for sale.

Through this review of the Toyota Venza 2010 model, it can be concluded that the Venza blends best attributes of cars and SUVs to make an interesting vehicle that is pleasing to drive and easy to live with. It seats up to five, is able to load cargo, and should work well for hauling dogs around. On the road, the Toyota Venza 2010 surely delivers smooth performance and well handles slippery conditions.

>>> Explore more in-depth reviews of the hottest cars on Naijauto.com