The redesign of the 2019 Toyota RAV4 has given it a new direction, with its distinguishing and unique styling, having one of the best performance levels when it comes to vehicle power and fuel economy. It has surpassed many rivals when it comes to some specific areas, making sure of matching and even surpassing their engineering and design quality, safety, price, and other features include a power moonroof, automatic liftgate, etc.

The 2019 Toyota RAV4 is not quite as spacious as its predecessors and many would deem it cramped. Still, it gives individuals looking for a compact vehicle just what they need which in part is all about satisfaction. Toyota offers the 2019 model year in both the hybrid and the petrol-powered engines. The standard petrol engine comes in 5 different versions, which include LE, XLE Premium, XLE, and the Limited which is the ultimate version. On the other hand, the hybrid model also comes in 5 variants and they are the LE, XLE, Limited, and XSE HV versions. So what can you expect from the 2019 Rav4? Read our review of the 2019 Toyota RAV4 model below:

Everything about the rav4 is unique for 2019. The styling has now been made to be more compact and box-like, while the distance between the chassis of the vehicle and the road has been increased for better off-road experience. importantly too, the rav4 has been made with a more sophisticated all-wheel-drive system which comes as a standard feature of the limited and adventure models of this year’s RAV4. More work was put in to ensure that drivers have a better experience when traveling through particularly challenging road types. However, the RAV4 makes some really annoying engine sound and has some tacky transmission and on the road performance. 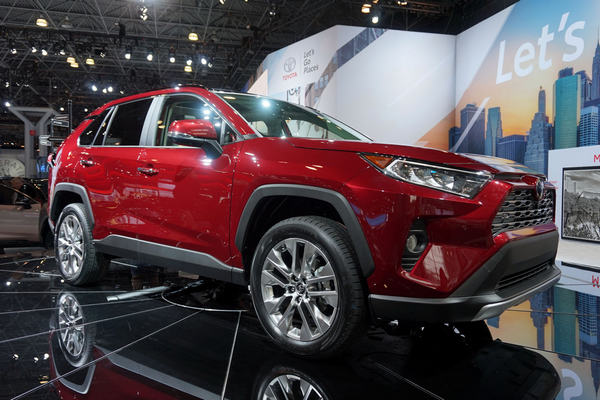 The RAV4's exterior has been redesigned showing some really masculine contours 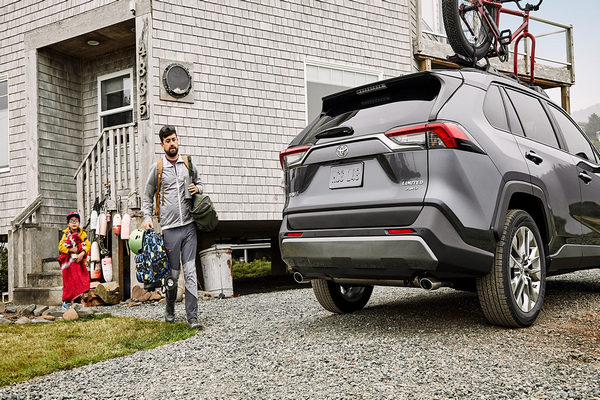 The 2019 RAV4 has been made to accommodate 5 people. Whether you are seated in the front or rear row, you'll be assured of ample head and legroom (though not the best in it class). The seats are made superbly comfortable, giving high-class satisfaction even in very long journeys.

The redesign of this RAV4 has made notable stamps in its interior design. the whole interior aspects went through a complete re-do, with the economy interior materials being replaced by more quality stuffs from the seats to the door paddings which are now dressed with soft synthetic leather. although the plastics in its doors and cabin doesn't really impress, but the upholstery and contrast stitching still makes it very attractive.

The driver’s power seat is adjustable to 8 different positions as required by the driver and the drivers preferred position can be kept in memory. The panoramic glass sunroof offers an exceptional view of the blue skies and perfect interior lighting that reflects and complements the drive mood. 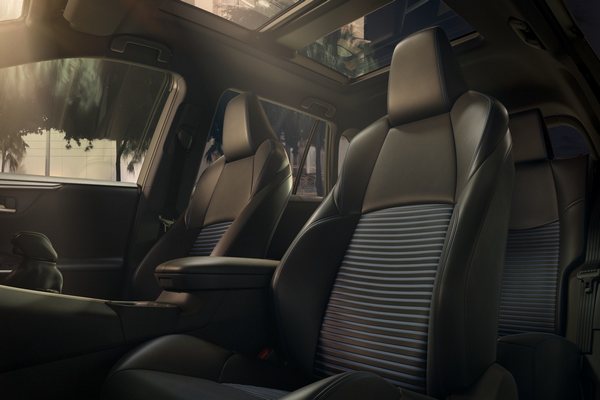 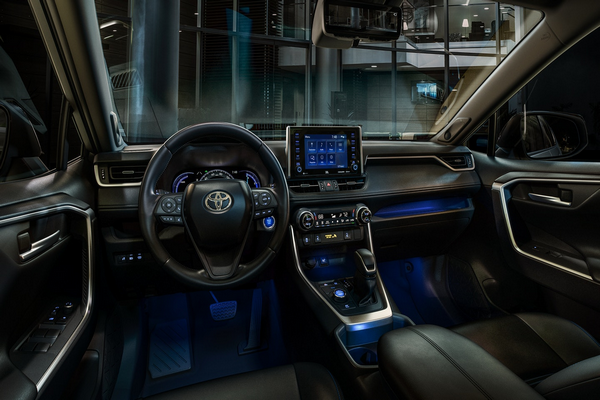 The interior with its 8-inch multimedia screen 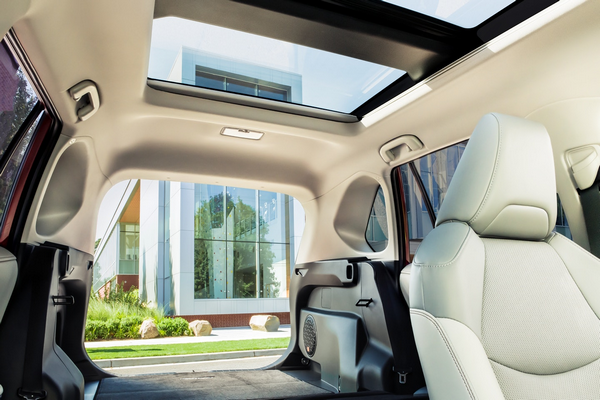 The RAV4 comes with an advance prototype panoramic glass roof

If style and exterior looks are among your priority, then the RAV4 looks right. unlike its predecessors, the 2019 RAV4 has been designed with some flair. The redesigned RAV4 with a longer wheelbase looks sharper and more aggressive than her predecessors. Also, the wheels have been retouched to compliment her aggressive appearance. The window area and box-like wheel arches give the RAV4 a very stylish and polish profile. The front and rear lighting are built with standard LED technology and the lighting design also offers an appealing appearance. 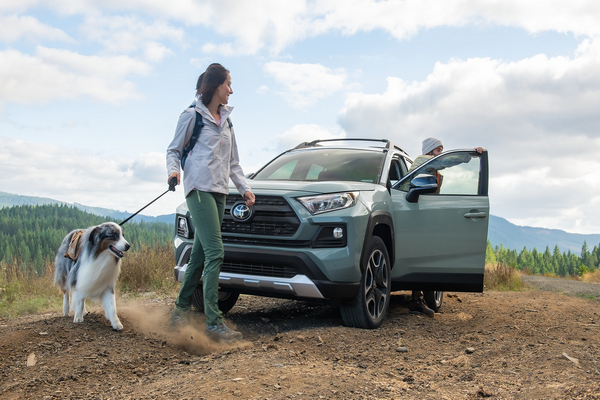 The 2019 RAV4 comes equipped with an 8-inch multimedia screen placed on the dashboard, making it easier for sight and touch. We very much appreciate the fact that Toyota has added quick-access buttons and physical volume and tuning knobs.

The screen on the dashboard works with a black theme making it easier for sight both day and night. The screen's architecture is not really different from that of its predecessors, making it easy for individuals familiar with Toyota. To enhance its audio capability, the 2019 RAV4 comes with the Entune multimedia system which is supported by an 8-inch multimedia screen. The RAV4 also comes with the JBL audio performance system which is embedded with the Clari-Fi technology and whose performance is enhanced by 11 masterly positioned sound speakers. These infotainment systems support several standard electronic gadgets and features like; USB port, a Siri eyes-free, Bluetooth, Wi-Fi hotspot technology.

This rav4 has been made to be more powerful than its antecedent vehicles. The 2019 RAV4 doesn't really fall among the sportiest vehicles but it delivers satisfying power and acceleration, despite the noise produced by the engine at times.

This outstanding vehicle comprises a 2.5-liter four-cylinder engine that cranks out 203 horsepower and torque of 184 lb-foot and can comfortably tow away a payload weight of 1200 lb. This engines unobjectionable power carries the RAV4's curb weight of over 3300 lb. It can accelerate to 60mph in just 7.8 seconds, starting from rest and has a combined fuel economy of 30 mpg (city EPA rating of 28 mpg and highway EPA rating of 35 mpg). Though not as fast as its rivals and producing some noticeable engine noise, this engine gets the job done in a praiseworthy fashion.

The 203 hp engine along with the 8-speed automatic transmission offers good acceleration. In fact, the Limited and Adventure trims come with dynamic Torque Vectoring All-Wheel Drive transmission system that makes driving on offroad terrains less of a stress.  Overall, the 2019 RAV4 has some really exciting Specs.

The handling of the 2019 RAV4 is far better than that of other vehicles in its previous generation. The car is very easy to drive although not sporty like other vehicles it is very excellent on winding roads, absorbing most road imperfections easily. The four-wheel-drive system is standard, and the RAV4 also has an all-wheel driving system available. 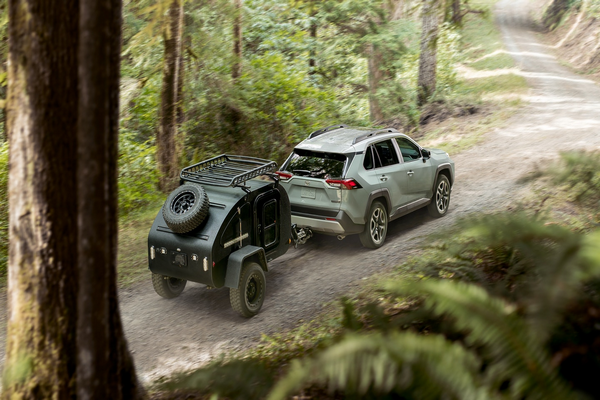 The RAV4 can comfortably tow over 1200 lb of payload 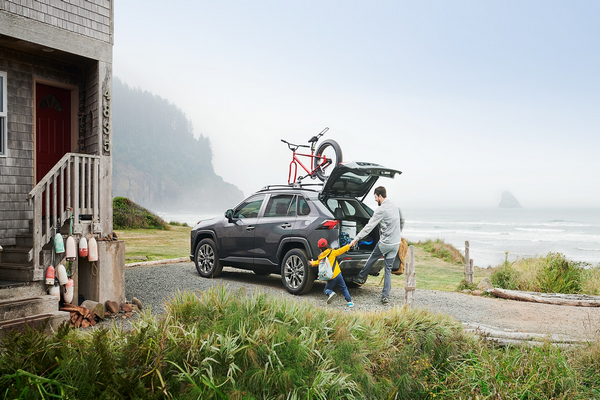 Toyota, as we all know produces vehicles ranked among the best when it comes to safety. The 2019 Toyota RAV4 definitely would not be an exception. Euroncap.com reports that the 2019 Toyota RAV4 got 93%, 97%, 85%, and 77% for Adult occupants, Child Occupants, Vulnerable Road Users, and Safety Assist, respectively. 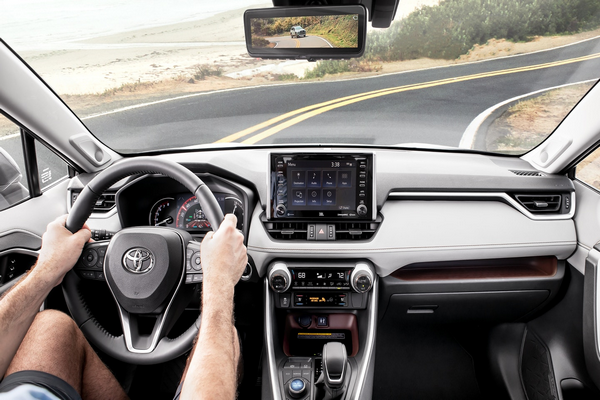 The 2019 RAV4 comes with the Rear Camera Mirror

We end our review of the 2019 Toyota RAV4 model here, if you like the article, please share this piece of content so that many more people can can read it. And if you are going to buy it, don't forget to check the Prices of Toyota RAV4 in Nigeria carefully and look at thousand of the Toyota RAV4 for sale on our cars for sale page!

>>> Check out our Reviews section for more Car reviews by auto experts!

>>> More reviews of other model years: