The delectable RAV4 (Recreational Activity Vehicle 4-wheel-drive) is a compact crossover SUV and a product of the Japanese automaker Toyota. The crossover was the 1st ever made and it was born out of buyers demand for a vehicle with more cargo space and the option of a full 4-wheel-drivejust like the regular SUVs but with drive feel and maneuver of a compact car. The 1st models were launched in Japan and in Europe in 194 and in Australia and North America in 1995.

Though the RAV4 is in its fourth generation of production, the 2008 model features in its 3rd generation and was a deep refresh for Japanese who were already seeking cheaper options for compact crossovers. This is based on the fact that the RAV4 was placed on the upper tax bracket due to its larger exterior dimensions and engine displacement ultimately making it expensive to own.

Here on Naijauto.com, check out Toyota Rav4 2008 review and prices in Nigeria.

The RAV4 is accronym for Recreational Activity Vehicle 4-Wheel Drive.

The 2008 RAV4 comes in 3 trims; base, sports & limited which features a number of changes from the other models in the 3rd generation RAV4 models. The new features includes a new 4-cylinder engine, a tweaked front and rear end and a third row seating arrangement available in the base and limited trims.

Unique features on base trims are:

The range-topping Limited trim includes 17-inch wheels for a smoother ride, dual-zone automatic climate control, an eight-way power driver seat, a leather-wrapped steering wheel and an in-dash six-CD changer (optional on other trims). We also find that the rear tires attached to the back door isn't available on the sport trim.

On the Limited trim, options include:

Optional on the Limited and Sport trims are:

The 2008 RAV4 has a very comfortable cushioned interior design with more leg room in the rear seat space which is even more space than some larger SUVs. The controls are simple and user friendly and there is also lot of cargo room. The cargo room is made possible as a result of the reclining seats and they can slide forward and backward to make more room for both passengers and cargo alike. Though the optional third seat row is said to be for kids, it can be maneuvered to turn the interior from the normal 5 seating capacity.

The 2008 model of the RAV4 didn't leave little to the safety of it's drivers and passengers. It is fitted with Anti-lock Brakes (ABS), Vehicle Stability Control (VSC) with Traction Control (TRAC) are standard. In the government frontal crash tests, the 2006-2010 Toyota RAV4 received five stars for the driver and four stars for the front passenger. In the side-impact crash test, the RAV4 got five stars for both the driver and the rear seat passenger. 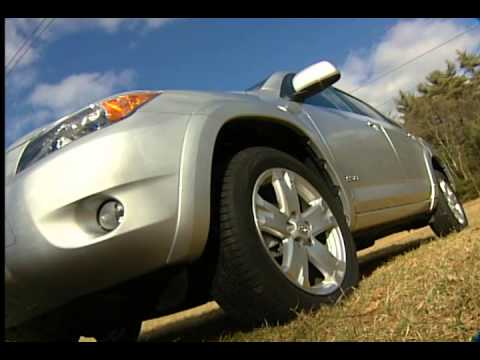 Remember the Toyota RAV4 was built to give you an on the road driving experience like a sedan and high vision like a SUV, well, we can say that driving a RAV4 feels more like driving a tall car than an SUV. It has electrical steering which is light, easily to control and responds fast. Combine this light steering feature with its thick suspension and what you have is a perfect car for off road driving and simple enough also to be used for regular errands. The large side mirrors make up for the thick rear pillars and road imperfections are easily waved off. The RAV4 has proper wind sound control though nothing about its road noise is clearly stated.

We can tell you that the compact crossover SUV doesn’t just give you a sedan driving feel but it also boasts of better fuel economy than most sedan cars. And for an all-wheel drive, non-hybrid SUV, its gas mileage is quite economy friendly.

The RAV4 common problems aren’t major flaws. They are mostly minor flaws that can be fixed with a few thousands of naira. Although some of these flaws are with factory fitted components, they do not necessarily depict the RAV4 is any less a super user friendly SUV.

There are certain tips when buying a Toyota RAV4 like most other cars you need to look out for. We listed a few of them here that are peculiar to the 2008 Toyota RAV4:

9. Prices of Toyota Rav4 2008 in Nigeria and cost of clearing

The range of prices for buying a used 2008 RAV4 varies. If you are having to import from abroad then you may have to factor in certains costs like cost of shipping, clearing e.t.c. Also, you need to know that prices vary from dealership to dealership so before you buy, check for the dealerships that have the best deals.

>>> How to buy the best used Toyota RAV4

Here we have stated the price range of the 2008 RAV4 as applicable in Nigeria and also the cost of clearing in Nigeria incase you are shipping in from abroad.

>>> Prices of Toyota RAV4 in Nigeria (all model year)

The Toyota RAV4 is a nice choice in compact crossover SUVs if you are looking for something easy to drive and maintain. It has good fuel economy, the parts are affordable and easy to get. For more fuel economy, we recommend the 4-cyliner model. Like we always say, your car is as good as you maintain it. So if you take proper care of your RAV4 it shouldn’t give you problems and you will enjoy using it for a very long while.

This Toyota Rav4 2008 review & prices is brought to you by Naijauto.com.

Okenwa Emeka is a prolific writer who combines his content creation skills with a strong passion for automobiles to make engaging articles for Naija car lovers. He is a member of the Chartered Institute of Marketing CAM with a diploma in digital marketing.