The 2004 edition of the Toyota RAV4 continues with the company’s design the previous year with only slight restyling. The difference of this vehicle design may not be clearly noticed when placed side by side with what they have been unveiling for the past 3 years. The RAV4 is a Toyota’s compact crossover SUV, and the vehicle chassis is inspired by recreational activities.

The Toyota RAV4 2004 is the second generation design of the vehicle which was introduced in the year 2000. The design will have to be reviewed below!

The external design of the 2004 RAV4 appears as a vehicle with four doors with 16 inches five spoke alloy wheels sitting on 215/70R16 tire ratings. The bumpers were redesigned to have fog lamps; the side mirrors are reshaped from the previous year as well. The spare tire is kept at the back of the vehicle, on the door to the boot.

The inspiration for any good vehicle interior is the ability to allow easy entry and exit, as much as best comfort for the passengers. The Toyota RAV4 2004 has a very willing design with broad door openings and effective seat levels. There is enough leg room for the sitting arrangement which has a comfortable material on appearance.

On the dashboard, the steering wheel has three spokes and it can be adjusted to suit the driver’s posture. It has a 6-speakers audio system at the center area with four AC vents in the front section. The box between the front seats has a padded cover which doubles as an armrest, and the same box holds cups for the rear section occupants.

The seats in front can be adjusted, but they have firm padding which could become tough over long drives. There are two cup holders for the front passengers at the base of the audio system, with expandable levers for different cup sizes. The rear seat can accommodate three persons, but they will have to manage the space if they are all adults.

For the cargo space, the volume can take up to 400 liters of luggage; also, the rear seats can be folded or removed entirely to create more room for luggage or goods. The space increases to about 1300 liters; the door to the boot opens outwards to the right, with its two strong hinges arranged vertically.

The RAV4 2004 which is available in Nigeria as a used vehicle in the following classes. Price of either type is given based on the price range on the market. However, the price of Toyota RAV4 2004 in each case may vary a little bit due to car condition, car mileage, currency exchange rate and so on.

>>> And click here to view affordable Toyota RAV4 2004 for sale on Naijauto.com! 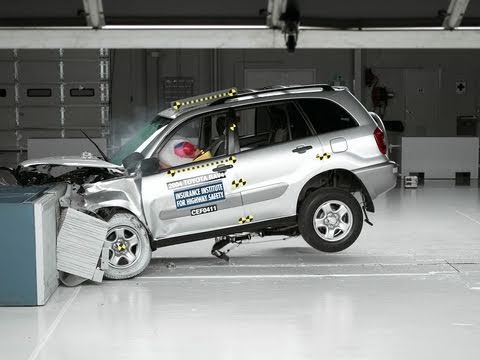 Watch the crash test of Toyota RAV4 2004 by NHTSA

There is only one trim for this vehicle but there are two configurations with one having a front-wheel drive and the other having a four-wheel drive.

Under the burnet of this vehicle, there is a 2.4 liters 4 cylinders in-line engine which produces up to 161 horsepower. The engine drives the 4-speed automatic or 5-speed manual transmission which pushes a four-wheel drive or a front wheel drive.

This engine meets the low-emission vehicle (LEV) standards in California, and it has the variable valve timing VVT-i technology of Toyota. The engine upgrades in the Toyota RAV4 2004 paid of with an increased torque of about 10Nm, and having a total torque of 192Nm. The RAV4 engine uses regular unleaded petrol as fuel, and the consumption is rated 21 miles per gallon on city cruise while highway gets up to 27 miles per gallon.

The standards held by Toyota in the safety of this vehicle includes seat belts for every seat space in the cabin. The cruise control, power steering and anti-lock brakes systems (ABS) assists the vehicle with safe driving. There are air bags fitted in the dashboard as well as curtain airbags for side impact safety.

The specification range of this vehicle is unique, and other automakers have their models that compete in similar functions with this design from Toyota. The competitors includes;

Nissan X-Trail is also a popular SUV on Nigerian roads

These competitors in the list above are the vehicles from manufacturers who share the automobile market in Nigeria with the popular Toyota company. If you don't want a RAV4 2004, you can choose among its rivals of the same model year for an alternative. All those cars prove their own strengths which stand the test of time on the local market.

>>> Refer to these comparison articles for more details:

There are only minor problems that have been experienced in the Toyota RAV4 2004, and there are possible fixes for them. The following include a few of the problems;

Generally, Toyota RAV4 2004 model feels smooth when driving, and it is economical with fuel consumption. The sleek style blends well with versatile handling, and it is available in full-time AWD. However, the 2004 RAV4 gives a slight discomfort with its front seats, and limited space. The design of the rear door does not allow its glass to open separately. Noises from the engine may make driving to be inconveniencing to the driver's hearing.

Having said that, this vehicle is a durable crossover to own and it serves its purpose as a recreational activities vehicle (RAV). Adequate maintenance with the aid of professional scanning and fault detection should keep the automobile functioning great. The safety assurances from the company is trustworthy, and you will be making a great decision if you go for the Toyota RAV4 2004 compact crossover SUV.