Toyota Matrix 2010 model - phased out but still loved in Nigeria

If sedans are known as compact and elegant vehicles, hatchbacks are actually a more practical, flexible sport wagon. Boasting sporty silhouette, a somewhat aggressive stance, and a rakish roofline, the Toyota Matrix 2010 model is one of the most popular hatchbacks in Nigeria.

You may know that Toyota has discontinued this hatchback in 2013 due to its declining sales. However, Naijauto.com still brings you a comprehensive Toyota Matrix 2010 model in Nigeria review with the hope of appeasing Matrix lovers and those who have long been waiting for the coming up of a new generation Toyota Corolla Matrix.

See a video of the Toyota Matrix walkaround review: 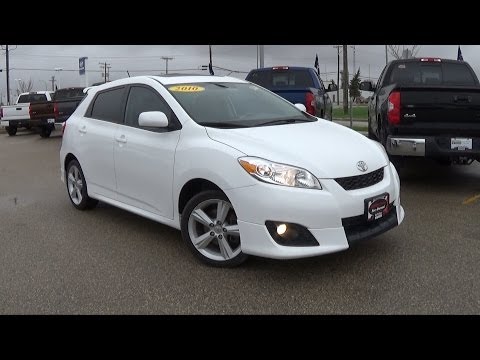 You are probably a Toyota fan if you are reading this. Get more great Toyota for sale car deals here. You may also look at an extensive list of Toyota car prices in Nigeria. Note that the  price of Toyota Matrix 2010 model in Nigeria may change based on factors like location, condition or even common Toyota Matrix 2010 problems found in the model you are buying.

For the second generation, Toyota started offering more trim levels for the Matrix in the US and Canadian market in 2008. Besides the base version, the XR is the top-of-the-line trim level of the car in Canada and the S model is for the U.S.

For the second generation, Toyota offers more trim levels of the Matrix for the US and Canadian markets

In this article, we will give a deep insight into the US market version Matrix with base trim level and top-spec - the Matrix S. The S edition comes equipped with more advanced technology, more standard features and also a more powerful engine.

Meanwhile, the base trim has a kit of basic features that are said to be enough for your daily needs. All about the two trims will be revealed below.

At first glance, the Matrix has a sporty and handsome look, a true  crossover utility vehicle.

The first generation is based on a crossover’s design while the second gen inherits some refinements of the Corolla with a sportier and lower appearance than its predecessor.

The Matrix’s front fascia is almost no different from the Corolla. However, the sides are quite high and prominent and the rear pillar is chunky, giving it a unique look from every angle. The roof looks couple's style, which eclipses a bit of the hot hatch’s beauty.

For a verdict, the Toyota Matrix boasts a sporty silhouette, an aggressive yet attractive stance, and a lecherous roofline.

At first glance, the Matrix gets a sporty and handsome look

The sides are quite high and prominent and the rear pillar is chunky, giving it a unique look from every angle

>>> Here are Toyota Corolla 2010 review and prices in Nigeria for your reference.

Although it is well-known for its impressive exterior, it is less refined and comfortable when it comes to the Toyota Matrix 2010 interior.

Still, the car is highly appreciated for its versatility and daily practicality. The Matrix is shaped as a small and classic hatch equipped with foldable rear seats.

The seats seem to provide less support for both the driver and passengers than most models in the market.

In detail, the flat cushions are not very comfortable especially for those who have greater height and weight on long trips.

However, for the quicker and shorter trips, the tilt/telescopic steering wheel and the seats still bring enough comfort with sufficient adjustability.

For the car seats, they seem to provide less supportive functions for both the driver and passengers than most on-market models

In the back, the rear row provides 3 seaters, but in fact, it is just enough for 2 average-sized adults. The hatch can also offer more cabin space by folding the rear seating row to house up more luggage and stuff.

The interior is simple and solid with matte-metallic and hard plastic wrapped material for most parts of the dashboard. However, the feel is far from a luxurious and high-end interior although the central control layout for the driver has its own simple charm.

To be fair, the dashboard looks a bit sportier and more eye-catching than the previous model year, but its fully-covered matte-metallic and plasticky surfaces make the car look somewhat outdated, plain and drab.

However, when it comes to the driving experience, the Toyota Matrix 2010's center portion of the dashboard supporting and the large rotary control for climate control brings a little more adventurous driving experience compared to Toyota Corolla.

The odometer is also covered by hard plastic

Bluetooth connectivity is added to the Toyota Matrix 2010's not so long list of standard features. Although the Matrix has a higher price tag than the Toyota Corolla, it seems that this stylish hatch is equipped with just basic features, and doesn’t offer so many options for the driver and passengers.

The base Toyota Matrix 2010 model has cruise control, power windows and mirrors, and air conditioning which as standard features.

Meanwhile, the S trim comes with a fuller package including additional fog lamps, an upgraded sound system and keyless entry. The Matrix S is also armed with a Sport Package consisting of body skirting, a rear spoiler and 17-inch alloy wheels.

Since 2013, the base trim has been updated with an all-new sound system with audio streaming

Since 2013, the base trim has been updated with an all-new sound system with audio streaming, a six-speaker system with satellite radio, Bluetooth hands-free calling and iPod connectivity. Meanwhile, the S version has been added a 6.1-inch touchscreen.

>>> Here are the Comprehensive list of Toyota service centers in Lagos

The Toyota Matrix 2010 engine is different in the two trim levels. The base model gets a 1.8 L 4-cylinder engine which is capable of dishing out 132 hp, while the S version is powered by a more powerful motor - the 2.4 L with a capacity of 158 hp. Before 2006 the engine was based on the

​The 2010 Toyota Matrix is a relatively safe car, with good scores in crash tests and a list of safety features that is comparable to other models in the compact car segment.

Insurance Institute for Highway Safety (IIHS) has rated the Matrix as 'good' in frontal, side and rear impact. While the Corolla gets a Top Safety Pick, the safety feature package of the Toyota Matrix 2010 model is quite good though not outstanding. It includes front side and side-curtain airbags, electronic stability control and anti-lock brakes.

One thing drivers should consider is that the visibility on the rear can be a bit limited due to the rather narrow window entrance, particularly for those who have a great height.

The 2010 Toyota Matrix is a relatively safe car, with good scores in crash tests and a long list of safety features

Is it truly goodbye?

Unfortunately, on August 5, 2013, Toyota announces that the Toyota Matrix would be phased out in the US market after the last production due to decreasing sales and there was no alternative for this hatchback.

One year later, the Canadian market followed by putting an end to the 2014 Matrix model year without producing any 2015 model.

Toyota kept selling a series of compact hatchbacks for the North American market through the Scion brand. On September 1st, 2016, the Scion brand was transferred to Toyota. And the Toyota Corolla iM is chosen to the Matrix’s successor for the 2017 model year.

The Toyota Matrix 2010 has been phased out

All in all, the above good things about the Matrix are strong reasons why this versatile and practical car is so popular on Nigerian roads.

Naijauto.com is the no.1 platform for Naija car lovers and drivers. We always strive to bring you the most practical and enjoyable information about cars, including Car Prices in Nigeria, Car Reviews, Car Tips, Cars for sale, and Car News. Bookmark our website for more!

1 killed, 5 hospitalized after a fatal multiple-car accident in Tamarac

Discover the best polytechnic in Nigeria in 2021!

Mother, Daughter killed after their car plunges off a cliff

2010 Toyota Matrix for sale in Abuja

2010 Toyota Matrix for sale in Lagos

2010 Toyota Matrix for sale in Abuja