At the beginning of the 21st century, while other automakers were celebrating the profitability of their SUV products, Toyota was looking further ahead. The carmaker anticipated someday car buyers will no longer accept the poor fuel economy and the sloppy job of handling that traditional sport-utility vehicles are offering. They would start to look for vehicles that offer improvements including true SUV convenience and car-like driving maneuverability. And the first generation Toyota Highlander has been born as a result and immediately became a great hit. After seven years of successful sales and being a model for other rival brands to build plagiarized mid-sized SUVs, the Toyota Highlander began to feel outdated, especially from the inside where occupants suffer cramped space. Quickly, Toyota has worked on the complete makeover of the original model and the result is an all-new Toyota Highlander 2008 model, marking the second generation of the lineup. 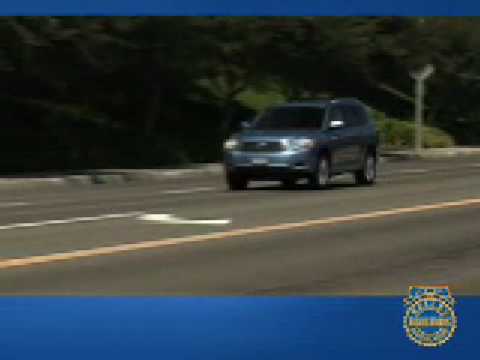 Speaking of the Toyota Highlander 2008 interior, the SUV shares the platform with the Camry, and the major part of its flavor is placed on the dashboard. The focal point is naturally the center control, with major functions being easily controlled via large knobs set in a convenient reach. On Sport and Limited models, above the stereo is a 3.5-inch screen displaying outside temperature, gas mileage and other necessary information. On the same screen, you can also see settings for the automatic climate control which allows to make up to three different temperature zones, two at the front and one at the rear. However, to select the settings, you have to deal with the cluttered controls consisting of 13 small buttons between two large knobs beneath the stereo. On the other hand, the basic air conditioning control is simple to use.

The Toyota Highlander 2008’s cabin has been more accommodating for taller adults than in the past. Both the first and second-row seating have expanded in all directions. And overall, the interior is made with high-quality materials.

At the third row seats, the Highlander's legroom is still left behind by the GMC Acadia or Saturn Outlook, but it is made up by the much easier access thanks to the improved slide/fold mechanism. Dubbed as “Center Stow”, the advanced feature allows its users to stow away the center part of the second row to make a walk-through access. The “20” section can smoothly slide into the center console, in its own cubby with simple operation.

The focal point is naturally the center control, with major functions being easily controlled via large knobs set in a convenient reach

Parents will be attracted to the Toyota Highlander 2008’s storage option. The front seat center console offer accommodation for 4 cups and a large storage bin, and the glove box is huge enough to comfortably fit a laptop.

Cargo space is rather limited with all three row being in use, at humble 10 cubic feet. However, once the third row is folded, 42 cubes will be released, and the second row being down brings the total space to a decent 95.4 cubic feet – lag behind the GM and Mazda SUVs, but still a competitive figure in its class. The only shortcoming we found is the third-row folding mechanism offers single-piece mode as the only option and lacks the 50/50-split mode that can be found on some other models, which is less flexible when you have both cargo and passengers to carry.

Despite being heavier and larger than the previous generation, the Toyota Highlander 2008 is still more drivable than most of its mid-sized SUV and crossover rivals. The excellent visibility leaves nothing to complain about and the steering is perfectly light, enabling the Highlander effortlessly maneuver through narrow spaces. The sturdy V6 engine coming standard delivers solid and pliant acceleration whatever situation comes. The ride quality of the 2008 Highlander is still more of a soft one, not too much is changed from its predecessor. That said, you can look for a Sport one which offers tighter control over body motions without any struggling in a harsh ride.

>>> Now you would like to read: 10 simple tips to maintain your used Toyota Highlander

It is probably a good idea to opt for a newer model year than the 2008 as the later model years will have problems fixed by the manufacturer. But considering its affordable price, the Highlander 2008 is still the model year of choice by a large majority of Nigerian car buyers. Following are the items that you should look for any Toyota Highlander 2008 problems, as recommended by thousands of users worldwide:

You can also visit our resource of car buying tips and advice for more helpful information that may ease your searching for a good used car.

Please consult the below for the Toyota Highlander 2008 model price. We also provide fair market prices for other model years for your reference.

Below are all the Toyota Highlander 2008 user manual, as provided by Toyota:

This review of the Toyota Highlander 2008 model is brought to you by Naijauto team. Don't forget to visit our Naijauto Reviews for more in-depth reviews of the hottest cars.