Needless to say, Toyota is among the world-leading automakers with great reliability and popularity. Most car lovers would love to drive home a Toyota vehicle to experience the refinement and high-quality drive.

The Toyota Corolla, which has been stirred up the auto market since the late 60s, become one of the most long-standing nameplates on the globe. The car has gone through over 50 years of existence and received a total of 7 generations with a myriad of updates and revisions, making it an A-class sedan in the segment with plenty of goodness and outstanding abilities.

With that in mind, Naijauto.com would like to bring you a deep insight into one of the year model of the Corolla that has gone through over a decade - the Toyota Corolla 2005 model - to prove what we mentioned above for this car is completely true, even for its aged model. 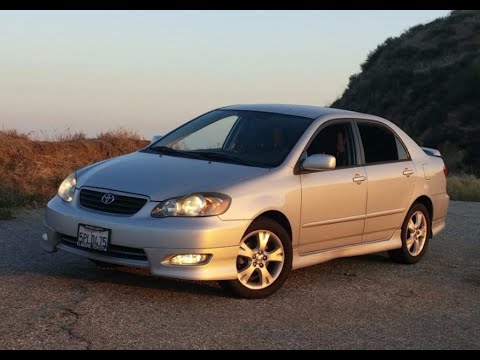 >>> See The history of the Toyota Corolla through 11 generations

The Toyota Corolla 2005 offers some variants but all comes as a four-door sedan and in one body style. The versions include the S and the CE, the XRS and the LE.

Stepping inside, the Toyota Corolla 2005 Sport comes adorned with a unique interior decoration consisting of a sporty tachometer, shift knob, a nice leather-wrapped steering wheel and chrome accents. It is also equipped with a full kit of safety features:

The XRS comes with a 1.8 L engine doling out 170 hp and being combined with a 6-speed transmission. The model features 16-inch aluminum alloy wheels, a sport-tuned suspension with revised steering and Michelin performance tires which are upgraded from the standard 15-inch wheels on all other Toyota Corolla grades. What make the XRS standing out are its exclusive exterior trim and special interior. It is also equipped with cruise control, front and rear disc brakes and front and rear disc brakes.

The XRS comes with a 1.8 L engine doling out 170 hp and being combined with a 6-speed transmission

The Toyota Corolla 2005 LE runs with both manual and automatic gearbox. The LE is decorated with additional remote keyless entry, variable intermittent wipers, halogen headlamps and power windows. It has body-colored door handles, and looks less sporty than the S. The interior is decorated with upgraded cloth seating surfaces and wood-like trim. With these outstanding features, the LE can bring comfort and luxurious cabin space for both driver and passengers. The car is armed with aluminum wheels, making it look more beautiful and attractive. A sunroof and cruise control are also equipped.

Walking around, the Corolla 2005 gets a newly-designed front fascia with a new grille, bumper and headlamps. The rear is also adorned with subtly-redesigned taillights.

At the first glance, the Corolla gets the same look to a small Toyota Camry and a bit like the Lexus ES 300, from its ovoid headlights to the wild yet oily shape. Thick front A-pillars and thick rear C-pillars, along with robust bumpers, bringing the Corolla a muscular look. The car comes adorned with standard 15-inch steel wheels, especially, the LE also receives a 15-inch wheel but has one more option for Aluminum cover.

The Corolla 2005 gets a newly-designed front fascia with a new grille, bumper and headlamps

The taillight module is designed to be mounted a part to the trunk lid. This design is quite good except that it makes the trunk lid to be more cramped.

Thanks to a long wheelbase (102.4 inches), the distance from the wheels to the end of the vehicle is shorter and getting in and getting out of the car is much easier because of the wide doors. The long wheelbase also improves the car’s appearance and its handling capacity.

Stepping inside, the Corolla offers a special interior that is not similar to other small cars - spacious and luxurious. For tall and big people, they may feel a bit cramped but for shorter and smaller ones, the Corolla 2005 can surely satisfy them as it provides a plenty of headroom, legroom and an ample room in the back for housing up 2 average-size adults. Although the third rear seat is also equipped with seat belts but it seems to be quite confined for this passenger’s space.

The seats are covered by classy and well-fitted materials, particularly, the driver’s seat offers much more comfort than many others at the same price range. With these excellently-designed seats, the Corolla brings both the driver and passengers comfortable feeling and interesting experience even during a long trip.

Even the thud sound as shutting the doors also feels pleasing thanks to the well-designed door panels.

The dashboard is uniquely designed with ergonomics, which is comparable to many expensive cars on the market. Its upper surface sweeps through the width of the car with an S curve and covers the door trim. Each side of the center console combines seamlessly with the bottom of the dash. Four small vents are uniquely reshaped to the top of the screen.

The radio is placed in a high position so it is easy to reach while three large round knobs for air conditioning and heating are located below. The parking brake handle on the left side of the center console, providing space for a small container compartment on the right. Cargo space is quite generous with small bags in each door and the glove box is also large.

There are 4 gauges in the toolbox including a large speedometer, a water temperature gauge, a smaller tachometer on the left and a fuel gauge mounted in a right-hand circle. They combine red letters on a plain white background, making it easy to read at night. An external temperature readout is also decorated on all models. Noticeably, the Corolla 2005 offers the biggest trunk in its class, creating a large space for containing more luggage and items.

For a verdict, the Toyota Corolla 2005 interior comes with a great refinement that is beyond expectation for a low-price sub-compact sedan.

Smooth and easy to drive are the most precise to depict the Toyota Corolla performance. In fact, it’s hard to complain anything about this workhorse. Packing a quiet 4-cylinder engine with 130 hp, the Toyota Corolla 2005 engine boasts an admirable acceleration performance. Among the three trims CE, S and LE, there is no gap in terms of suspension, engine as well as transmission at all.

Perfectly mated to the mill is an electronically-controlled 4-speed automatic gearbox which consists of a shift logic system in charge of holding a gear longer. If you’re into manual shifting, a 5-speed manual transmission is right up your street that will effortlessly shift via a quite tall shifter. For the manual, the Corolla returns decent gas mileage of 32/40 mpg City/Highway while this figure is 30/38 mpg in the automatic transmission.

>>> If you wonder whether automatic or manual transmission variant you should go for, here are some comparison:

Behind the Corolla’s wheel, there are no terms called “stiff” or “sloppy” owing to the excellent power steering. As well as that, some work has likewise carried over the suspensions for a more even ride (besides a big assistance of the long wheelbase). In detail, the tuned suspension system is now soft and performs well while soaking up bumps and road vibration. On top of that, the body roll is minimal and you will feel stable and secure in car at all speeds. Handling is impressive too; however, if you desire crisp handling of a performance sedan, take the XRS into consideration whose suspension is much stiffer.

Speaking of the all-new XRS, it is blessed with a refresh 2ZZ dual overhead cam mill, working in tandem with a 6-speed manual gearbox seen in the Matrix XRS and Celica GT-S. This 1.8L 4-cylinder unit is capable of 170 hp at 7,600 rpm and a peak torque of 127 pound-feet at 4,400 rpm. To a greater extent, for a burst of power from 6,000 to 7,600 rpm, it comes fitted with lift system together with Toyota’s iconic VVTL-i variable valve timing. As to EPA fuel efficiency, the sedan gives 25/32 City/Highway.

As we’ve noted, the XRS is pampered with a sport-tuned suspension system featuring higher-rate coil springs and shocks in addition to a lower ride height. What’s more, it also has got a sport strut tower brace located between the shock towers and massive 16-inch alloys covered by Michelin performance tires. The reworked steering system currently includes a more rigorous steering column for better responses, along with a power steering rack.

Below are specs of Toyota Corolla 2005 for all trims:

>>> You might also like to read: What should I look out for when buying a used Toyota Corolla?

Roll down to see more Toyota Corolla 2005 model pictures, from all angles.

It is almost impossible to find a brand new Toyota Corolla of such old model year like 2005. If you love Corolla and want to own a tear rubber one, check out the Toyota Corolla prices of its recent models:

>>> Full list of Toyota car prices in Nigeria (ALL MODELS)

9. Where to find Toyota Corolla 2005 for sale in Nigeria

Otherwise, you can visit one of the accredited Toyota dealerships in Nigeria for saleman assistance and financing programs. Of course, the price tags are a bit higher to cover those services and dealership profit.

If you are lucky, you can get a Toyota Corolla 2005 from Nigerian Customs auction of seized cars. Make sure you grasp these guides before making a bid:

Lastly, Cotonou, Benin Republic is also a viable option to hunt for a tokunbo Toyota Corolla if you are confident in your resourcefulness. Here are our guide: Cotonou cars buying guide: buying steps & prices (updated 2019).

This information of Toyota Corolla 2005 review and prices in Nigeria is brought to you by Naijauto.com review team.

1 killed, 5 hospitalized after a fatal multiple-car accident in Tamarac

Discover the best polytechnic in Nigeria in 2021!

Mother, Daughter killed after their car plunges off a cliff