The Toyota Corolla appeals more to buyers, far and wide, introducing three trim levels: the sleek CE, the sporty S and the high-class LE. The sedan qualifies to be among the most sought after in the US, even up to this current time.

For over three decades, the car continues to keep its reputations of affordability, reliability and durability; and has drawn remarkable recognition, within and without. Here’s a detailed review of the 2001 Toyota Corolla that reveals the beauty of this car for what it truly is.

>>> See The history of the Toyota Corolla through 11 generations

The 2001 Corolla comes with a 16-valve 1.8 liter four-cylinder engine, powered by a five-speed manual transmission. What’s optional for the CE is a 3-speed automatic transmission, of course, that’s not regular so that’d incur more costs. The S and LE also get option transmission engines, a four- speed automatic. The Corolla proposes competence in terms of road performance, responsive handling and comfort. The vehicle’s all-aluminium engine is really powerful and has got awesome fuel economy.

What’s new for 2001, as opposed to Toyota’s 2000 model, is a VVT-i (variable-valve timing). The technology builds a determined low-rpm torque that pushes away from traffic signals, dashing elegantly on the road. On the highway, this same engine gives off a 39 mpg, not emitting unpleasant noises in its road mission. At cruising speeds or at shifting modes, one would expect loud vibrations. However, the Corolla is good at pulling things off and impressing everyone with its skills. The result therefore is a ‘tip toeing’ of the car in times like these. 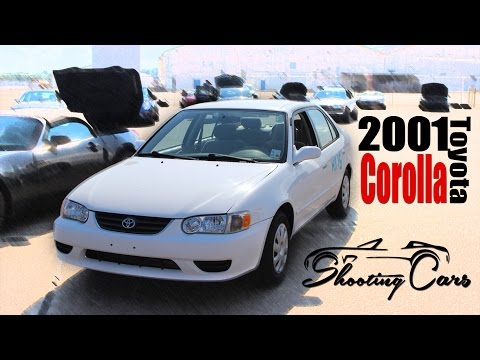 The Corolla is comfy for four, yet it can accommodate five. With snug lean-back seats, the car provides enough room for both driver and fore-seat passenger. The rear seat however, is less spacious and much convenient for two, rather than for three (though it’s not a bad idea for a third person to squeeze in, if the other two are more than willing to manage). All the same, leg room wouldn’t be something to look forward to, in the event that that happens.

Far from the Corolla’s outlook, the interior design is finely finished and upscale attractive. The rev counter (otherwise known as tachometer) together with a temperature gauge also comes installed. Control buttons are ample in size and user-friendly. The center console also holds out some functions like housing a cup holder, storage box and a closed-in bin.

Its instruments are competently managed in a curve-shaped dashboard

Moving on, the cloth upholstery is enticing and carries a lasting appearance. One could almost say that it’s a permanent setting, like the makers installed it just so it would never be changed again. Moving stuff just got easier. The trunk is roomy enough to open through to the bumper for convenient loading, much so. Its maximum trunk cargo space is 12.1 cubic feet and 33.2 inches rear leg room for back seat passengers.

It has a maximum trunk cargo space of 12.1 cubic feet

>>> [Expert Car Compare] Camry vs Corolla, which used car should you buy?

4. How does the exterior of the Toyota Corolla 2001 look like?

The 2001 Corolla presents a traditional outlook, not pulling attraction to itself. Though plain, the Corolla is neat and lets show of a certain level of exuberance. For its walk around, it’s got a new fascia, beaming halogen headlights, chrome trim and fashionable taillights.

What we get for the S model is a little upgrade, quite distinct from the regular base Corolla. There’s a new grille, coloured side moldings and new fenders.

By width, the Corolla gets a few inches shorter and in compensation of that, it gets longer by a total of 174 inches. The CE trim is built with a 97 inch wheelbase and with curb weight of 2410 lb.

It is almost impossible to find brand new unit of Corolla of such old model year. If you insist owning tear rubber Corolla, consult the prices of more recent Corolla models.

>>> Take a look at our Toyota Corolla 2001 for sale at best prices. Buying online is always cheaper and save time.

>>> Or visit Accredited Toyota dealerships in Nigeria for consultation and financing schemes.

Foreign used price for 2001 Toyota Corolla starts at 1.25 million naira, extending to 2 million naira, which is largely dependent upon preference and personalization options.

>>> What should I look out for when buying a used Toyota Corolla?

Nigerian used price for 2001 Toyota Corolla starts at 500,000 Nigerian naira, levelling up to about 1.5 million naira which should be the highest price, regardless of what the features are.

>>> Full list of Toyota car prices in Nigeria (ALL MODELS)

The Corolla is a rugged tracker on the road, damning the odds and proving itself nonetheless. Handling is perfect and transportation is more than convenient with this car. It’s also budget-friendly on fuel basis. If you’re frugal and looking for a well-balanced car, then look no further. The Corolla would thrill you in so many different ways. If you want a little upgrade, you could go for the S. It’s sporty and irresistible. You can be sure that you won’t be disappointed with the 2001 Toyota Corolla.

>>> To get the price of any Toyota model in the market, please refer to our comprehensive list of Toyota car prices in Nigeria!

Here are reviews of Toyota Corolla of other popular production years that you might want to check out:

This information of Toyota Corolla 2003 review and prices in Nigeria is brought to you by Naijauto.com review team.