The Toyota Camry owns all the qualities of a washing machine from behind the wheel, but it’s a winner of comfortable riding on the highway, and its V6 engine tops the midsized sedan segment. It is no accident that the Toyota Camry remains one of the sedans of choice of Nigerian families. Read on this in-depth review of the Toyota Camry 2010 model to explore more about this hot-selling sedan.

The Toyota Camry 2010 gets numerous changes for the model year 2010, notable among them is that the 2.4-litre engine is now upgraded to a more powerful 2.5-litre four-cylinder. At the same time, drivers can now enjoy six speeds instead of five on both automatic and manual transmission.

Other updates include a refreshed taillights and grille, a new audio system that comes optional with Bluetooth connection and satellite radio on LE model and base model, automatic windows on all the doors, and standard stability control.

The Toyota Camry 2010 remains endearing features from previous model years, including buttery-smooth ride and spacious, tranquil cabin. And other features just got better, take its powerful, fuel-economic and super smooth 268-hp V6 as an example. It is not only the best V6 engine that Toyota Camry lineup has ever offer ever, but also the best V6 we can find on family sedans.

The downside on the Camry 2010 lies on the interior quality which may come a little underwhelming. Having said that, given a highly competitive segment like the family sedan, the Camry's firm position is praise-worthy. Scoring exceptionally in crash tests and boasting great refinement and comfort, the Camry is the right car that family sedan buyers are looking for. Just so you know, Toyota Camry is one of the most cost-effective cars in Nigeria.

>>> Best alternatives for the Toyota Camry in Nigeria

>>> Top 10 cars cheapest and easiest to maintain in Nigeria

The Camry 2010 gets a mid-cycle facelift. Most remarkable is the increased engine cylinder to 2.5 litre from the previous smaller 2.4 litre. The transmissions both manual and automatic now can switch among 6 speeds instead of five.

The exterior is also redesigned, featuring a new grille, enlarged headlights, and reworked taillights. Speaking of safety, all the models now get stability control as standard feature. Other noteworthy additions are automatic up and down windows, a new audio system coming as an option with Bluetooth connection and satellite radio on the lower-spec variants. 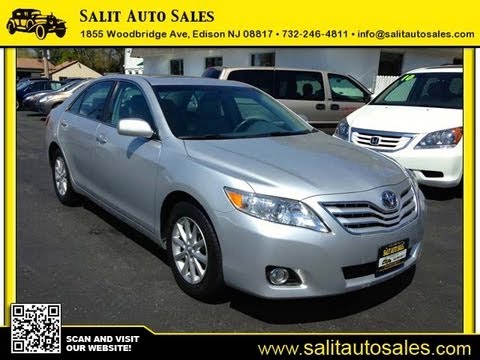 The  Toyota Camry 2010 XLE receives the most daring design on the front end, which embodies curving cut lines, sharp points and entertaining surface planes. Dipping broadly through the middle, the hood really pushes visual heft out over the front fenders, and atop the horizontal slats is the Toyota emblem. All the diverse cosmetics elements are blended on the single-piece fascia, making an attractive, smooth aerodynamic overall look.

A new front bumper and grille are also given to the XLE. The intake opening is lowered and the projector headlight is enlarged, which are well aligned with the dominating design and adds to the XLE’s bold and distinctive look.

The Toyota emblem on the Toyota Camry 2010

In profile, the XLE looks less trendy and a tad bulky with square doors, symmetrical windows and a high beltline, embellished by a barely noticeable character line running through the door handles mounted on the flush. The wheel gets circular openings which is well aligned with a lower profile for a sporty look and driving.

The Toyota Camry 2010 XLE ’s rear end is somewhat reminiscent of the BMW 7’s squared trunk lid, only in a smaller figure. Its trunk gets a bustle-like hump on the trailing edge, which blesses it a mild aero-lip, suggesting that it serves as a rear lift reducer when the car is at high speed. The theme of the headlight is continued on the taillights and are sophisticatedly detailed.

Getting inside, the XLE has been adorned with shades of elegance. Although the treatment is not quite up to Lexus-level luxury, the Camry really gives a highly polished interior for a mid-sized, mid-priced sedan. The XLE used a faux shiny wood-grain trim all over the inside, including surrounding the door-release handles. The XLE offers lots of space, comfortable seating both at the front and rear, although taller passengers may feel less thigh supported with the seat bottoms. Especially, the  XLE  offers a luxury that rarely found in the segment: reclining seatbacks.

>>> Check out these practical buying tips:

The Toyota Camry 2010 XLE  is more of a floaty and soft ride rather than a firm and expected one, though it doesn’t mean it is drifting or inaccurate. We feel totally comfortable and secured while leisurely cruising it along light traffic roads. The Camry XLE is a car that doesn’t worry you when driving. We found it relaxing, enjoyable on the trip, plus a good sound system. Below are the full list of the its features:

The SE has the boldest, most distinguishable look of all. Its true spoiler enhances the aero treatment on the trunk lid while the lower edge of the car is flared outward by a full body kit. The 17-inch, six-spoke aluminum wheels also add to the sporty vibe of the SE. The aerodynamic massaging is not so recognizable to the eye. The Toyota stylists also tuned the flow to aerodynamic force nearly equally between the front and rear tires, helping to press the car against the pavement.

From the inside, the Toyota Camry 2010, SE gauges are designed with black lettering on the contrasting white background with sharp blue backlighting. It also gets exclusive interior treatment with either ash gray or dark charcoal hues and a leather-wrapped, 3-spoke steering wheel.

The SE offers entertaining and fun driving experience. It steers the turn-ins more accurate than it is normally expected in a Camry. It corners with stable and solid manner, and minimal body lean is noticed. On the brake travel, it feels soft and the travel is long compared with sport sedan counterparts.

The  Toyota Camry 2010 SE V6  really tempts the driver to actually use the sequential manual shift provided on the Toyota’s 6-speed automatic. In manual mode, the transmission will keep the selected gear from shifting up, while promptly shifting it right down with a simple click on the lever. The shifts feel smooth, yet swift and confident.

Please see below the list of features on  SE  version:

The  Toyota Camry 2010 Hybrid  is fitted with a 147-horsepower four-cylinder engine, mated with a continuously variable and an electric motor which amplifies the petrol engine performance and harnesses the energy that could have been wasted while slowing and braking, thereby significantly cut down on the fuel consumption. The Hybrid is equipped similarly to the XLE, with added smart key push button-start.

Known for its soundness and reliability, Toyota Camry 2010 problems are only a few recalls for minor problems. Naijauto advice for used Toyota Camry 2010 buyers is making it a point of checking the owner’s manual on the car you are consider buying and make sure the recall repair has been done. And during the inspection do check the car’s service record to ensure all the servicing has been carried out in compliance with the manual.

You may also want to check if the car has been a rental or fleet car earlier. Although it shouldn’t prevent you from considering such car, it is advisable to be cautious when buying it. Rental or fleet cars sometimes experience hard life and sometimes are driven by reckless drivers.

Please see the table below for the full information of  Toyota Camry 2010 specs.

Please consult the table below for the latest Toyota Camry 2010 Price in Nigeria. We also include the prices of the Toyota Camry of other model years for your further information.

As a prestigious platform for car buying and selling,  Naijauto provides Toyota Camry 2010 for sale at best prices. Do visit our listing page for new and used hottest cars for sale.

Considering the midsize family sedan market full of great models, the Camry success deserves recognition. The Toyota Camry 2010 gets almost every jobs well-done, and it delivers reliable, pleasant and comfortable transportation for up to five. And it is one of the most fuel-efficient mid-size vehicles available. If you want a comfortable and functional car, full of useful features and an engaging ride, you can’t go wrong with the Toyota Camry 2010. This review of the  Toyota Camry 2010 model  is brought to you by Naijauto.com.

>>> Looking for information of a specific model? Consult Naijauto exclusive reviews of the hottest selling cars in Nigerian market through Our Reviews.

Toyota Camry Envelope 2001 prices in Nigeria, specs & how to maintain