The most popular cars on Nigerian roads are not even the Fords, Peugeots or BMWs. It's the Toyota and Honda. This is for a lot of reasons that include fuel economy, ruggedness reliability, affordability and high performance. This is probably also why there's this continuous comparism of the Toyota Camry and Honda Accord. Both cars have ruled the Nigerian roads for years, and fans on either side have refused to admit if the other should win. We at Naijauto have decided to bring in some auto experts into the matter to review the specs of both models. Sit back and enjoy our a comparison review of the Toyota the Camry 2007 vs the Honda Accord 2007 (a.k.a Discussion Continues).

3. Size and space: pretty much the same for both Camry and Accord

The Toyota Camry 2007 and Honda Accord 2007 pretty much go head to head in this aspect with only slight differences. Firstly, they are both midsize sedans, made to be spacious - as compared to their previous editions. They can also accommodate 5 people comfortably, at a time. That is 3 people at the back, the driver and one more passenger in front. Although Nigerians assume the back seat is made for 4 people. But that's another topic for another day.

The second hip room in the Camry 2007 is 53.9 inches while that of the Accord is 53.5 inches. The front shoulder room, second shoulder room and second leg room in the Camry are all about an inch higher than the Accord. The Accord only takes a bit more space of an inch in the second head and front head rooms. They both have equal space in the front hip rooms. The Camry also has a bigger boot of 15 feet, while the Accord 2007 manages a 14 footer.

The Honda Accord 2007 has an exterior body length of 191.1 inches while the Camry 2007 is 189.2 inches long. However, the Camry is about an inch higher in height as it measures 57.6 inches, while also being an inch wider - all on the outside.

The Toyota Camry 2007 and the Honda Accord 2007 both have all-wheel ABS systems, pwr brake types, and brake disks in front. But the front brake rotor of the Camry is a bit thicker than that of the Accord. The Camry also allows you steer a bit more than the Accord 2007. 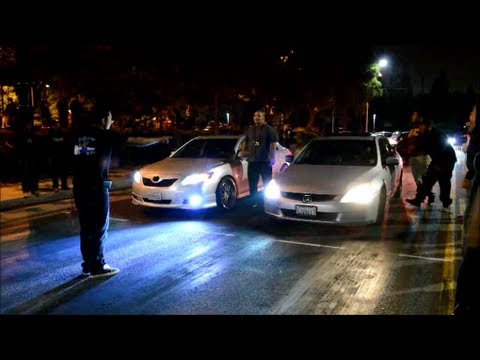 The Camry 2007 has a 15 feet fuel tank, while the Honda competitor manages a 14 feet tank. This commiserates for the slight differences in city mpg. They both have an MPFI fuel system, gas i4 engine type, and almost similar cooling system, but the Camry allows more gear reverse ratio as compared to the Accord 2007. The Camry also allows for bigger tyres as compared to the Accord. This helps make it easy to balance on the road as well.

Below is a list of Toyota Camry and Honda Accord prices in Nigeria.

It's almost difficult to say which one is better as they are similar in many features with only slight differences between the two, so the comparison of the Toyota Camry 2007 vs the Honda Accord 2007 will end in a deadlock. That said, if you want a car that keeps more fuel so you won't go to the fuel station frequently, go for the Camry 2007. If you want one that can save you more fuel during city-run, go for the Honda Accord 2007. Good luck with your decision!

>>> Check out more articles like this in our review section on Naijauto.com!