Toyota Camry Envelope 2001 prices in Nigeria, specs & how to maintain

The Toyota Camry 2001 model (a.k.a. Envelope) belongs to a family of mid-sized vehicles and has been on the market since 1982. The Camry series of the Japanese automobile giants have survived for multiple generations, and are some of the most popular models ever produced by the company.

The flagship model of the Camry has a narrow body but through the decades, its producers have seen it evolve into a midsize vehicle with a predominantly sedan body type. Before it became an independent product line in 1982, the Camry name was incorporated into other models including the Celica and Corona. Before 1982, it was also called Daihatsu Altis, Scepter, Vienta, Vista, and Aurion.

A car that has great second-hand value

The Toyota Camry 2001 was dubbed “Envelope” due to the slanting design of the rear lights, which takes resemblance to the tongue of an envelope. The Envelope belongs in the XV20 generation which spanned from 1996 to 2002. But it is the product of a facelift to the front and rear for sedans produced from 2001 to 2002. However, it still bears major similarities to its early versions in terms of appearance. This is also the last generation of Camry to offer the station wagon version.

Here on Naijauto.com, you get to read in-depth reviews on a wide spectrum of automobiles created by auto experts. Later in the article, we shall be discussing the trim types, performance, specs, and all other important features that make the Toyota Camry 2001 Envelope a choice car for millions of Nigerians.

Depending on the condition of the car, tokunbo or Nigeria-used Toyota Camry 2001 Envelope ranges from 650,000 to 1,000,000 naira. It will be quite a tasking feat to find a new model of this midsize sedan in Nigeria as several Camry models have been produced after it. Buy your Camry at one of the trusted Toyota accreditted dealers in Nigeria or try a smarter and quicker way to get your car online with Naijauto.com!

The Camry Envelope comes in 5 trim levels namely CE, LE, LE V6, XLE, and XLE V6. Though all trims of the Envelope model may look similar, they have different, updated or added features. Starting from the base model CE, you should know what you are buying so as to be equipped with the right information when buying your car.

The base model CE comes with a 2.2-liter I-4 engine which carries 136 horsepower and 150 torque @ 5,200 and 4,400 rpm respectively. The CE trim is a front-wheel drive with a 5-Speed Manual w/OD transmission. It features a textile interior and AM/FM stereo that is equipped with a scanner radio. Its 15-inch wheels come with steel rims.

The LE is next to the base model CE in trim level, and it features all of the equipment of its predecessor, except for a few upgrades which include the replacement of the 5-speed manual transmission to a 4-Speed auto OD/Transmission. The engine configuration and performance remain the same but a manual front air conditioning system was added to the dash.

The Camry LE V6 Envelope boasts a significant upgrade from the LE in engine power and performance but features the original 5-Speed Manual OD/Transmission of the base model. Apparently designed for folks who enjoy getting practical with their limbs, the LE V6 trim is equipped with a 3.0-liter 6-cylinder engine, 194 @ 5,200 rpm horsepower and 209 @ 4,400 rpm torque for a more powerful drive. It, however, still has the cloth upholstery of the two previous trims.

The XLE trim was based off the LE model, possessing most of its default features and some upgrades that are worth the added few thousands. Though same with the LE in engine power, performance, and transmission, the XLE makes an exception with its automatic front air conditioning, premium fabric upholstery, heated mirrors, keyless entry, and Driver Lumbar support. Some cool additions you’d say.

>>> Read here to get more tips on how to buy cars in Nigeria:

As you’d guess the XLE V6 trim has its 4-cylinder engine replaced with a 3.0 V6. It takes after the LE V6 in engine power but retains the automatic transmission feature of the XLE. The XLE V6 also comes with leather interior and 16-inch alloy wheels.

Even with the facelift from the 1999 model, the Envelope’s exterior is not exactly a show-stopper. It is quite attractive and sleek but doesn’t have all the contour lines and fancy lights associated with sophisticated cars.

Being a Toyota product, it's easy for maintenance

When the Camry team manufactured the Camry Envelope, they had safety and comfort in mind. The interior is spacious and has adequate “padding” that keeps undesirable sounds outside the car doors. Like most other Toyota models, all the accessories on the dash are easy to use and understand. No finicky features.

Upgraded from the Pencil Light, the 2001 model provides roomier space

The EPA rating for the base engine model (4 cylinders) and auto transmission is just shy of 12 liters per 100 kilometers. This means that you can travel for an estimated 380 miles (610 kilometers) on a full 70-liter tank.

All Camry 2001 models have the side airbag option in the front compartment, which helps mitigate the possibility of injuries from impact for driver and front-sitting passenger. You can ask your dealer if it comes with these if you’re buying a used vehicle. All models except the CE come with Antilock brakes. All seats come with safety belts, including the rear center seat, which is not a common feature even in the latest cars.

7. How to maintain Toyota Camry 2001 Envelope

What buyers should always be keen about, are the engine, cooling system, and transmission.

Make sure you change the engine oil regularly especially if you bought a used car.

You risk the overheating of your car if you have a leaky radiator.

Also, make sure you top it with the coolant.

Endeavor to change faulty engine parts with original ones as these parts are quite affordable.

Listen to your dashboard warning lights to carry out fixes in time.

Last but not least, you should also carry out a general inspection of the car at least once a year.

For more detailed tips on how to maintain used Toyota Camry by Naijauto experts, navigate here! 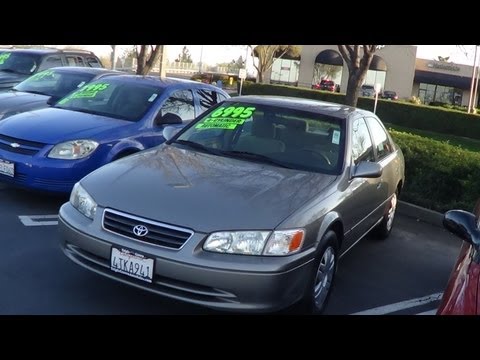 If you see Nigerians opting for a particular brand and model, you do not need to do too much of the "why" inquiries. The Toyota Camry 2001 Envelope is one of the most used cars on Nigerian roads. No doubt, its reliability, fuel economy, and cheap maintenance earned it the people's loyalty. And the alias "Envelope" is always called enthusiastically because of the success it has achieved on the Nigeria auto market.

Oluwafunsho's rare interest in automobiles, for what happens both under the hood and inside the cabin has earned him extensive practical knowledge on a range of vehicle brands and models.

A research writer who markets his skills globally, he works with industry professionals to manage content across a range of niches including automobile, business, finance, telecoms, and travel.

A few companies he manages content for include WhichPortableAC.com, The Fat Taxi Istanbul and SAAT Specialty Coating Solutions.