The Toyota 4Runner 2005 is a thoroughly advanced but traditional SUV. It has been known as one of the most excellent off-roaders in its segment, a great mid-size sport utility vehicle to have. First built to be a compact that refused to take on the body type of a conventional pickup truck, the Toyota Hilux Surf, as it is called in Japan, is of not only a great off-road capability but also highly sophisticated and modern features and technologies.

This time, Naijauto.com has decided to pamper our off-road enthusiasts by a full-scale review of the Toyota 4Runner 2005 model. We expect that this article will be helpful for all 4Runner fans and Nigerian car lovers.

The Toyota 4Runner 2005 comes available with 3 variants including the Sport Edition, SR5 and Limited. Toyota also offers different options for the car’s engine and driving systems consisting of a V6 or V8 engine and four-wheel-drive or two-wheel-drive.

The 4Runner is not a small car and the 2005 model is even bigger than its predecessor - the 2003 model. One of the most distinctive features of the 4Runner is its high floor and low roof. Walking around, the SUV looks bold and rug with a large and rounded front fascia featuring big headlights and an aggressive horizontal grille.

Its rocker panels are adorned with chunky cladding and over fenders, revealing the car’s forcefulness to conquer every challenging terrain. Meanwhile, the rear gets a clunky-looking spoiler and sizable tail lights. The side mirrors are also provided to enhance the visibility of the driver.

The rear gets a clunky-looking spoiler and sizable tail lights

In overall, the Toyota 4Runner 2005 interior is practical rather than beautiful. It is comfortable and spacious with good-quality materials. The standard cloth is eye-catching, especially, that of the Sport and SR5 versions are convenient with side bolsters to hold the motorist in place as driving off road or cornering. All seats are equipped with 3-point seatbelts, adjustable headrests and 8-way adjustable driver seat. Because of the high floor and low roof, the driver and front occupants will feel like they are suspended in the cabin. 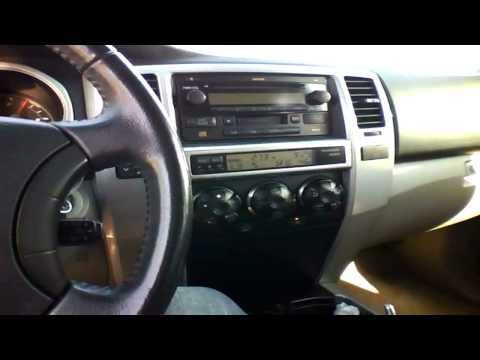 However, entering into the rear seats seems to be more difficult than in a sedan because a relatively narrow space that the doors can provide. But once you get in, the second seating row offers a roomy space and it is best for two people. The center position of the seat is slightly lifted, so the central occupant has to sit with a bit uncomfortable feeling. Moving to the third row, it actually includes 2 separate seats which are foldable to widen the cargo space. These seats are easy to place and also not too hard to get in.

The third row is foldable to widen the cargo space

The center of the cabin is highlighted by a 2-tone dashboard which also includes the instrument. Gauges are placed in 3 deep binnacles preventing the front occupants from accessing them while the fuel gauge is installed an inclinometer to read exactly the tilt when the 4Runner is inclining.

A unique feature in the interior is a couple of small convex mirrors located at the rear corners. The mirrors are made to observing approaching cars when getting out of the parking lot. Besides, the 4Runner also offers an optional navigation system, including a rearview video camera placed at the rear bumper that shows images on the 7’’ navigation screen when the car is reversed.

>>> View all best cars for sale at cheap prices on Naijauto.com

Under the hood, the Toyota 4Runner is powered by a 4.0L V6 or a 7L V8 engine which is added to the range in 2005. The former is equipped with lightweight all-aluminum construction, a linkless electronic throttle control system and fully variable valve timing. It is capable of cranking out 245 hp and 382 Nm of torque, mated to a 5-speed automatic transmission. The V6 drinks 17 mpg on city road and 21 mpg on the highway, for 2WD variant.

Meanwhile, the 4.7L V8 gets an electronic throttle control system with intelligence (ETCS-i) and variable valve timing with intelligence (VVT-i). It generates 270 hp and 447 Nm of torque. Its fuel comsumption’s figures are 16 and 20 mpg on city road and the highway respectively, for 4x2 version.

Both powertrains have a cranking system that keeps the engine running until it reaches full combustion, so the driver doesn’t have to hold the key until the motor turns over. This feature is often used in luxurious sedans.

Thanks to a live rear axle, the Toyota 4Runner can handle excellently, even like a truck. The suspension damping is great while the ride is smooth, nice even on on rough roads. In particular, the two-wheel-drive 4Runner is evaluated to have an impressive off-road capability which can be beyond all-wheel-drive SUVS.

Thanks to a live rear axle, the Toyota 4Runner can handle excellently, even like a truck

Last but not least, the 5-speed automatic transmission boosts the efficiency and responsiveness of the Toyota 4Runner 2005 engine. It is paired with Artificial Intelligence Shift control.

If you are going to buy a Toyota 4Runner 2005, take a look at our table for the 2005 Toyota 4Runner price in Nigeria. We also include the prices of the 4Runner for other model years for your further information:​

Download  Toyota 4Runner 2005 owners manual for your convenient use.

The Toyota 4Runner 2005 is an excellent trail vehicle. It is quiet, smooth to drive and offer plenty of space for your friends and family. The 4Runner also promises to be a great choice for all off-road lovers as it can bring good quality, a great reputation, reliability and durability from Toyota - one of the leading carmakers not only in Nigeria but also all over the world. We truly hope that this review of the Toyota 4Runner 2005 model can deepen your love, your understanding and your admiration for this superb off-roader.

*A fun fact about the 2005 model of the 4Runner is that the model for the Southeast Asia market was replaced by the Toyota Fortuner. Find out more fun facts on Naijauto.com Stay tuned with us for more fun facts and latest car news, tips and tricks, car price updates, and in-depth reviews!

Who is the biggest boy in Nigeria? BNaira biography, net worth, lifestyle, cars and houses