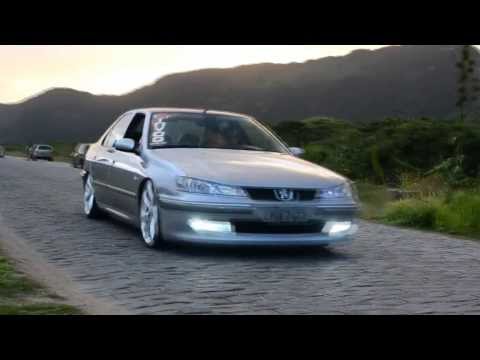 The Peugeot 406 2004 was reworked as part of the second generation refresh. It was actually a success as it gave the Peugeot 406 2004 a more upmarket look and feel. This has been made possible by an array of subtle but effective touches, including resculpted controls, improved dials, higher quality materials and added classy touches such as chrome handbrake and chrome vent buttons. The seating was also improved with a more generous range of adjustment, higher backrest, and better support. The drivers can now enjoy comfortable armrest and the stereo now can be conveniently controlled right from the steering wheel. The speed ride has been improved by detail adjustment and more feel has been found on the power steering. High equipment level was still retained across the lineup as twin airbag at both front and side comes standard on all the models in the standard range for example, together with electric mirrors, a trip computer and front fog lamps. Buyers now have a wider range of options including L, LX, GLX, SRi, Executive and V6 models, and the special edition Rapier. All the model comes with luxurious feel, high-quality fittings and fixtures, along with lovely touches such as a penholder next to the gearstick.

The pre-facelift Peugeot 406’s meek face has been replaced by a bolder, more aggressive frontal look. The same has happened under the hoods of some models. Those with 2.0-liter petrol engines are mated with the 16-valve 137bhp powerplant carrying over from the Peugeot 206 RC. More power will be provided from on the 2.2-liter petrol with 160bhp on the SRi model. Unless you really rate car performance against what the stopwatch says, you are likely to be more than pleased at the wheel of the 110bhp 2.0-liter turbo diesel. Being a hi-tech common rail HDi engine, it reaches a nearly perfect 60 on the way to 119mph, while effortlessly achieves more than 50 mpg on long trips. The Peugeot 406 2004 also offers the more advanced 2.0-liter diesel version which is capable of producing 90bhp. With the diesel engine taking 14 seconds to 112mhp, it is in no way a ball of fire, but for family use, we believe it is just perfect.

Unless you really rate car performance against what the stopwatch says, you are likely to be more than pleased at  the wheel of the 110bhp 2.0-liter turbo diesel

With the diesel engine taking 14 seconds to 112mhp, it is in no way a ball of fire, but for family use, it is just perfect

If you are a Peugeot 406 fan but crave for a more powerful engine, you can look for the 2.2-liter HDi engine which has 136bhp thanks to many shared advance technologies with the Peugeot 607. The engine is able to catapult the Peugeot 406 2004 to 60mph within merely 10 seconds while still able to comfortably return it to 58mpg, presenting the Peugeot 406 2004 as an attractive performance.

Petrol drivers can look for the interesting 2.0-liter HPi engine that employs high-pressure direct injection technology for the significantly improved performance, economy and emissions. With the figures reported, the 406 2004 well fulfills the Peugeot’s claims. The top power put out reaches 143bp, 6bhp larger than the standard 2.0. The picked up pace is 60mph within 10.3 seconds, half a second quicker. The top speed is 130mph, up 1mph from the 2.0. However, the engine range basically remains the same, with the entry level being 1.8-liter petrol and the top-ranger being 3.0-liter V6.

The Peugeot 406 2004 wagon measuring over 4.7 meters long is among the longest cars in its class. It is also among the heaviest, which is probably a reason why it lacks a tad of instant reflexes that found on the sedan’s chassis. Having said that, hold the 406 wagon’s steering wheel and you immediately feel how good the Peugeot 406 sedan’s chassis is. It offers maximum grip, minimum roll, while delivers a real pliant ride at the same time. Peugeot 406 engineer team has equipped the wagon variant longer rear springs and improve the damping for the longer wheel travel. However, the engineers might not very well think of the automatic self-leveling which comes as a pity.

Below is the information on Peugeot 406 2004 fuel consumption.

Having said that the Peugeot 406 2004 is made with an excellent level of build quality, problems with the four-cylinder petrol engines have been reported. Quite a lot of users have experienced engine stalling, especially with the 2.0-liter versions, so make a point of starting the engine from the cold when doing the test drive. Another common weakness is the timing belt. Do check if it is changed every 30,000 miles because it may otherwise sudden snap, thereby stopping the engine.

Although the Peugeot 406 2004 is not the most modern car, the qualities that earn it drivers’ great fondness have nevertheless endured. Its iconic ride quality, generous space exceptional handling and great fuel economy still have few rival to beat, although the interior may appear a bit outdated. The best buy among the whole range may be the 136bhp HDi diesel version which will definitely satisfy your need, why not give it a look?