The Peugeot 405 is a classic car. It was released in 1988 and reigned till 1997. It is one of Peugeot’s most successful cars, and was voted European Car of the year in 1988 with about 2.5 million units of the car sold worldwide. It was Europe’s best selling family car, especially in France and was the 8th bestselling car in Britain in 1992 and 1993.

The Peugeot 405 was manufactured between 1988 and 1997, being a successful model in sales

Coming in at the time it did, the Peugeot 405 was meant to replace the also very successful 505 and the numbers show that it really did live up to expectation.

The 1.4-litre engine which was coupled to a 4-speed transmission and generated 70 hp

The 1.6-litre engine coupled to a five-speed manual transmission and generated 92 hp

The 1.9-litre engine coupled to a 5-speed manual transmission. This version also came with an option for automatic transmission

Buyers were offered with options of 5 different engines

With the 1.9 and 2-litre engines, more power was produced and this gave the car a better feel of life and vibrancy while driving it also meant that fewer obstacles could stand in its path.

There were also 8-valve engines available in two versions; one producing 110 hp and the other 125 hp. The 16 valve engine was preset in the M16 one of the best sport cars of the era and it produced 160 hp. It was able to reach a maximum speed of 220 hp.

There were several models produced in this era. Do not bother about the number it was different in different parts of the world. The Peugeot 405 provided so many models that could fit into different family sizes, markets and pockets; this is one of the factors that made it successful around the world.

Even though the lower models were not essentially well equipped, the Peugeot 405 offered a great driving experience at that time. Its engines were very fuel-efficient, especially the diesel engines.

The motors sport version of the 405 was a household name in car racing then. It was actually one of the best sports cars of its time and won awards in 1988 at the Pikes peak international climb and in 1989 and 1990 at the Paris-Dakar rally.

>>> If you are going to buy one, check out Comprehensive list of official Peugeot dealers Nigeria

The exterior of the car was fairly well designed. It has a compact body that was built on a Citroen Bx platform. The idea of the 405 was to get a car that had a superb chassis and good mechanical features and it did that well. There were, however, too many sharp angles and the build could have been better. In terms of aesthetics and appeal, the 405 did not live up to the standard of some of its rivals at that time.

The exterior looks sleek and light

The rear wing adds to its aesthetics

Taillights also had the characteristic Peugeot pattern and the trim

In 1990, there was a facelift that made adjustments to the interior of the vehicle. The dashboard was made to look more aesthetically appealing. The former design was more mechanical.

In 1992 there was another facelift. This time, the boots had their opening lowered. The former design had really big openings that made loading and emptying cargo quite difficult. The suspension of the 405 was also improved after the facelift.

The steering wheel was built for firm handling

The interior of the Peugeot 405 can comfortably seat 5 adults. The type of seats present depends on the model; lower models have upholstered seats, while higher models have leather seats.

The inside of the vehicle was very noisy in the initial models but then was made soundproof in subsequent models. Driving in a Peugeot 405 is not entirely very comfortable, although it proved to be better at handling the bumps on the road than some of the competition. Some of the models had power windows and sunroof.

The 405 offered enough legroom and headroom for adults, with plenty of cargo space in the trunk. Foldable rear seats were also introduced later in production which helped to make more space available.

The dashboard features a CD player and the controls for the Air conditioner and heater are all easy to find. There is not much cargo space in front.

Even as far back as the 90s, a driver’s airbag came with the 405 and after the facelift, there was also a remote central lock present in some versions.

There were some complaints about the power steering pumps and faulty air conditioners in many models. Plus, some of the gearboxes were also noisy.

Customers actually could buy a racing version of the car 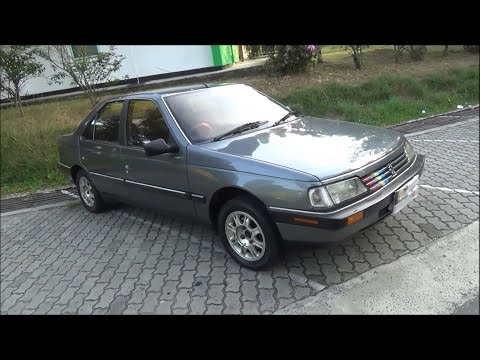 The Peugeot 405 was not built to be a luxury car. It was just your average family size car that you just drive comfortably from place to place.

Although, we must say that it was a little ahead of the competition. The durability of Peugeot is never in question and this as one of the things that propelled the sale of this vehicle all around the world, especially in Europe.

At its introduction, it was available at about $30,000 which made some to criticize it, it also had relatively high costs of maintenance and this put some more people off.

Even though the era of the Peugeot 405 is gone, it still made an indelible impact in its time and we still remember it for its durability, power, and simplicity.

>>> You can find more reviews like this on Naijauto.com. Check out now!

Testimony Olajire is a witty and innovative content writer with Naijauto.com. He creates top quality educative content on automobiles that readers can both relate with and enjoy. He has a keen interest in understanding what lies under the hood of any car, practical driving and safety tips, automobile history and managing automobile-related businesses; all in the Nigerian context.

Testimony Olajire is a witty and innovative content writer with Naijauto.com. He creates top quality educative content on automobiles that readers can both relate with and enjoy. He has a keen interest in understanding what lies under the hood of any car, practical driving and safety tips, automobile history and managing automobile-related businesses; all in the Nigerian context.

He is a Christian, singer, songwriter and a staunch supporter of the best player in the world, Cristiano Ronaldo.