​The 307 Peugeot has been known as a small family car from the famous French manufacturer - Peugeot. It came to the auto market as a replacement of the Peugeot 306 which was phased out in 2002.

Being in attendance on the market for over a decade, the 307 went away and left the car lovers with great regrets in 2014. To appease 307 fans, the carmaker decided to bring them its successor - the Peugeot 308 with a plenty of goodness in 2007.

This time, we will not choose the 308 to review, we pick the 307 Peugeot 2008 to give you a deep insight because we believe that not few of us are still falling in love with this beautiful car. 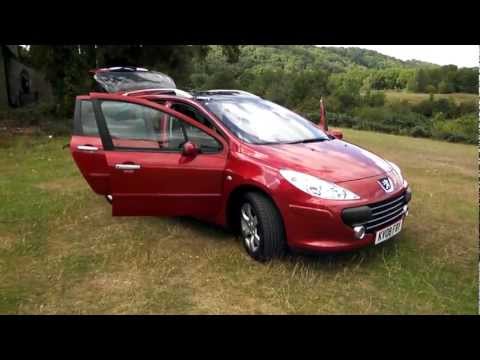 Walking around, the very French 307 Peugeot 2008 gets a stylish and seductive design, though it retains a conservative appearance in an attempt to create a timeless design. And the attempt has succeeded as in December 2001, the 307 obtained a great favor from car enthusiasts, especially in the Australian market. Up to now, the car’s look is fashionable enough, compared to modern car models today.

Walking around, the very French 307 Peugeot 2008 gets a stylish and seductive design

Being the replacement of the 306 which was a small car, the 307 Peugeot 2008 gets a bigger size, taking it into the mid-sized lineup.

In October 2005, the French marque decided to give a facelift for the 307, bringing the car a “big-grille” look. This had stirred up the auto market along with the launch of the Peugeot 407.

The facelift received a refreshment not only in its shape but also in its steering and handling, which required its customers extra money to get the changes.

It should be noted that in 2004, the 307 lineup welcomed a couple-cabriolet variant dubbed the 307 Peugeot 2008 CC. Although carrying a bulky tail that is not exactly of fondness for a car in its class, the convertible still gets a good look as it is adorned with a top down. With this innovative design, Peugeot can proudly claim to be the inventor of the folding hardtop and being the one who came up with practical designs in the 1930s.

Getting inside, the 307 Peugeot 2008 is capable of housing up to four people, however with a second passenger in the back seats, it seems to be cramped as you have to move the front seats forward a little in order to widen the legroom.

With a second passenger in the back seats, it seems to be cramped as you have to move the front seats forward a little to widen the legroom

Meanwhile, the front seats are said to be spacious and comfortable for both the driver and passengers. But for the steering wheel, some drivers complained that it was quite disappointed as the 307 Peugeot 2008 - the replacement of the 306 - didn’t bring them the dynamic response as the smaller 306 did.

Speaking of the cabin space, the 307 receives appreciation as it is quite spacious for holding luggage and can be widened by folding the rear seats. If regularly carry a lot, you can look for the station wagon.

The car offers 3 options for the engine, two of them are petrol and the others are diesel, which are available in 1.6 L and 2.0 L versions. The engines are combined with a 5-speed manual transmission or a 4-speed automatic gearbox.

The car offers 3 options for the engine, two of them are petrol and the others are diesel,
available in 1.6 L and 2.0 L versions

“Lethargic” is the exact word to describe the 307 Peugeot 2008 automatic. The 1.6 L 307 automatic comes with a sluggish response, even when the car air-conditioning system id off, its acceleration still lies motionless. Well, waiting for the acceleration’s operation is like waiting the sun rises!

It comes to another story as speaking of the manual version. The 5-speed manual transmission offers a quite good driving experience with a relatively short gearing, good torque spread and a totally quick response. It whirs from 0-100km/h in a neck-snapping 11 seconds before topping out. Both the 2.0 L and the 1.6 L deliver decent performance for everyday drive.

>>> Check out: Manual vs automatic - which is more reliable and boasts higher performance?

On the road, the 307 Peugeot 2008 showcases a nice balance with a solid braking feel, communicative steering and a good grip.

On the road, the 307 Peugeot 2008 showcased a nice balance with a solid braking feel,
communicative steering and a good grip

The 307 Peugeot 2008 receives very few complaints about the costs of servicing, repairing and parts. It also has a fairly simple mechanical layout so it comes friendly for DIY owners who are capable of doing routine servicing themselves. Having said that, it is advisable for users to have a owner's manual before opening the hood, and major repair should be done by professional mechanics.

>>> Top 10 cars cheapest and easiest to maintain in Nigeria

>>> How to find a reliable mechanic in Nigeria? - Follow these 5 steps!

The 307 Peugeot 2008 seems to stuck in problems with its electrical components.

All in all, although the 307 Peugeot 2008 has still some shortcomings, it is still a reasonably high standard. And the fact is that the reputation of Peugeot is undeniable as its models come more popular than other European brands for comfortable cars.

Other reviews and prices of Peugeot cars in Nigeria:

This Peugeot 307 review is brought to you by Naijauto review team.