In September 1998, the French carmaker - Peugeot brought the auto market an all-new car dubbed the Peugeot 206 that has gained great favors of car enthusiasts all over the world, especially those who are in Britain. Well, it has become one of the best-selling new cars on the market, immediately.

For this reason, Naijauto.com gets an honor to bring our well-liked readers a comprehensive review of the Peugeot 206 2004 and hopefully, this article will be a strong encouragement for those who are wondering about this French car.

The baby Peugeot 206 2004 gets a fresh style with sweeping angles and large and bold curves. Its shape showcases a great dedication of designers as it looks so attractive and stylish with an ideal balance between the boldness and elegance.

It is no accident that this car is so popular, especially as a family car. One of the Peugeot 206 2004’s strong points is its well-designed interior. The car offers an excellent spacious cabin which is capable of housing up comfortably 4 people and a considerable amount of luggage. The Peugeot 206 2004 interior has been designed with soft and convenient seats which can be folded to widen the cargo space, bringing a lot of usefulness for both the car owner and passengers.

Speaking of the car’s performance, it showcases an excellent handling capacity with a great driving comfort on every terrain

Although it is primarily aimed at running in the suburbs, the Peugeot 206 can easily be used as a long-range cruiser thanks to its superb suspension system and a usual focus on relaxing travels designed by suspension French engineers. 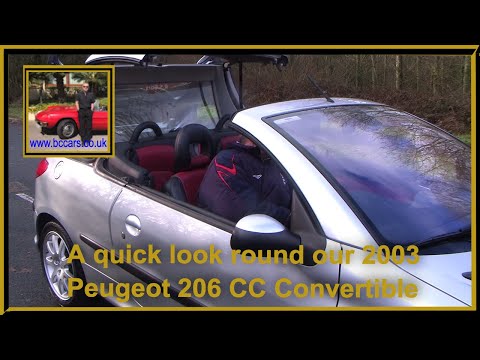 The Peugeot 206 GTi180 and RC were launched in 2003 in Uk market and the rest of Europe, respectively. The GTi180 boasts to be the top-spec version in the range and both variants were made to bring a higher level of performance in the lineup.

The base engine of the Peugeot 206 2004 is a 1.4 L unit which is only sold in March 2002. Even though the 1.4 still shows a good performance than expected but with an appropriate number of passengers. More popular is a 1.6 L engine equipped in cars from 1999 onwards.

The larger 2.0 L powertrain is equipped on only the sports GTi. This engine model comes in some variants including the 100 kW, the 102 kW and the 134 kW which is used in the GTi180 cranking out 180 hp as its name evokes. The 180 has variable valve timing, a dual exhaust system and several detailed changes to increase efficiency. It whirs from 0-100km/h in a neck-snapping 7 seconds.

The 2.0 L is also available in some variants of the convertible 206 CC, but in its lower-powered form. With this car model, the adaptable roof gets an additional weight, which can affect the performance of the car.

The 2.0 L is also available in some variants of the convertible 206 CC, but in its lower-powered form

Speaking of the car’s performance, the 206 is evaluated to be easy and safe to drive with light controls. However, this turns a disadvantage on more challenging roads as the driver feels a bit feedback and driving sense from the steering wheel. The car offers good levels of grip and a fairly controlled body roll, making its handling capacity better and easier.

Speaking of the car’s performance, the 206 is evaluated to be easy and safe to drive with light controls

However, the 5-speed transmission seems to be a deep annoyance, especially for the sportier variants. Wait! It is still not the biggest bugbear! The most awful thing in the Peugeot 206 2004 lies in the driving position. The arrangement between the pedals and steering wheel are weird as the steering wheel is too far away from the controller while the pedals are too close together and the driver’s sitting angle is so odd.

Most Peugeot 206 models work in a conjunction with a 5-speed manual transmission a standard, with a more option for a 4-speed automatic mode for the drivers who have to jump traffic usually. Since March 2004, the Peugeot 206 was updated an automatic version coming equipped with Tiptronic-type manual overrides. However, the GTi 206 offers only the manual transmission.

Even when the Peugeot 206 2004 has received a plenty of compliments, it still has its own problems as most of the cars on the market do. Looking for a perfect vehicle seems to be impossible but to seek a good-quality vehicle is not difficult if you know how to check it carefully. For the Peugeot 206 2004, we recommend you some parts that need to be paid more attention to when buying:

Indicator stalks tend to break on post-July 2001 vehicles, which were often caused by ham-fisted users. But in 2003, they are replaced by stronger units, so later Peugeot 206s get no problem with this.

Make sure that the boot floor still has a spare wheel. This item is installed in the cradle but it is easy to be stolen. Therefore, you should buy a lock to keep it in place.

In 1.4 L petrol versions, mounts usually run into troubles while all variants in the Peugeot 206 lineup are easily worn out under in the front suspension, showing a MoT failure. Additionally, the automatic gearboxes sometimes also suffer from troubles with its electronic management systems.

If you are buying a low-spec version of the 206, check the sunroof carefully for rattles and for the top-spec GTi, check its doors for damages because these items are impossible to fix or replace with a new well-matched one.

If there is water in the control box, which is placed in the footwell, the central locking system will not able to operate. Pre-1999s models are those which suffer from the worst impact of this problem. So check the central locking carefully before drive home the Peugeot 206.

Besides, since 1998, the Peugeot 206 has experienced not less recalls to become more complete:

It can be summarized that although the Peugeot 206 2004 does not own far-reaching changes and best-in-class equipment, we must applaud the French manufacturer’s efforts to better its famed car. But come to think of it, the Peugeot 206 2004 seemingly caters to those who are willing to trade several utilities for a premium interior and outer beauty. So, to decide whether it suits you is subject to your own opinion.

Finally, Naijauto.com entertains the hope that our Peugeot 206 2004 Review is a worthwhile result that helps you better apprehend the 206 and for a bigger hope, will be a cogent argument to make you drive one home.

Learn more about other hot cars in Nigeria through our numerous in-depth reviews, please click here.