The Lexus RX and Acura MDX are two very popular SUVs in the Nigerian market. They have distinct design features that make their form factor stand out. Being something close to a crossover SUV, they look as appealing as full size sedan cars and midsize luxury SUVs, thus giving the best of both worlds. Here in this comparison review of Lexus RX vs Acura MDX, 4 aspects will be highlighted from; the design, handling, performance and price.

Both sharing the most recognisable feature of large headroom and legroom, the two also boast large cargo spaces while the second gen Lexus RX with its unibody design help in giving it a car like handling. 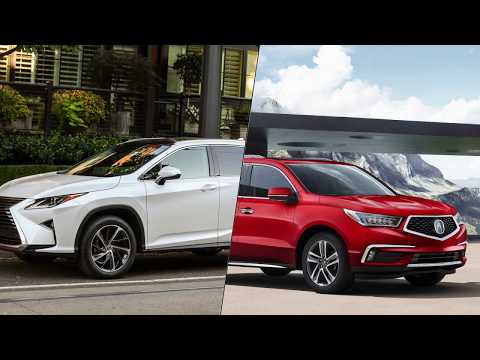 ▶
Lexus RX vs Acura MDX - Which one is better ? - Naijauto.com

With their different design philosophies, the Lexus RX has its form factor borrowed from the Toyota Camry while the Acura MDX has its design gotten from the Honda Pilot.

The design of the second generation Lexus RX is immediately recognizable on Nigerian roads and lauded as one of the most popular vehicles seen in the dreaded Lagos traffic. It has a more visible flow silhouette from the hood to its tailgate than its predecessor, the first generation. For its interior, the option with the leather upholstery make it live up to a luxurious brand model.

Sweeping roofline and subtle coupe like design of the Lexus RX

With its muscular wheel arches and pointy nose and tail ends, the second generation Acura MDX inherits some of its exterior design cues from the Honda Pilot. Being a luxury SUV, it points out a chrome finish symbol on its grill which has no discontinuity in design. This musculature enhances the sport bias of the SUV.

The Acura MDX showing its muscular design and angular fascia

Picking the better design here would be based on personal preference. The customer will have to make a choice of either the sweeping car like design of the Lexus or the daring musculature of the Acura.

The handling of a car is simply how its chassis responds to input from the driver. This includes throttle response, steering especially, suspension quality and braking. These two vehicles respond very differently to handling inputs with the Lexus eyeing at better handling at low speed while the Acura model steers its focus more on the high-speed handling.

As a Lexus, the ride is aimed at a serene focused audience. With the air suspension set-up, the ride is smooth and reminiscent of luxury. The elevated driving position gives a truck feel when driving. With a shorter wheelbase of 106.9 inches, handling at slower speeds is better. The vehicle stability control program gets aggressive sometimes taking away fun driving that can be derived from a little slip.

The Acura MDX has soft ride connotation, it’ll be the preferable ride for your mum to take to the grocery store. Its ride is plosh with comfortable sitting and does not offer the oomph of an Audi Q5 or a Volkwagen Tuareg. Steering inputs are quite precise due to its precision electronic power steering. Though it feels like a pimped up Honda Pilot, its sports magneto-rheological dampers (these dampers contain special hydraulic fluid whose viscosity can be varied using a magnetic field) which enhances customizable driveability. The dampers can automatically adjust to road conditions by getting more or less stiffer, all this can affect the rate of body roll, pitch and lean rate during a turn.

With a longer wheelbase of 108.3 inches handling control is better at higher speeds.

Both of these cars have luxury at the centre piece of their handling, delivering a smooth ride for consumers. Any sport defined form of driving is inhibited. They both have different approaches to the smooth handling achieved with Lexus’s air suspension and Acura’s magneto-rheological dampers. If you enjoy vehicle stability at very high speeds, then the longer wheelbase of the Acura will appeal to you while low speed maneuvers and smaller turning radii will suit the owners of the shorter wheelbase Lexus RX.

The performance of the Lexus RX vs. Acura MDX shall be considered in the following parameters:

Below is a table depicting their performance characteristics:

The transmission of the Acura MDX showing its gears

From the table of values above the Acura MDX performs slightly better than the Lexus RX for the second generation with a transmission with more planetary gear set and faster 0-60mph time.

>>>To get more detailed pricing of the Acura MDX and Lexus RX, check out:

Making a choice between Lexus RX vs Acura MDX comes down to your preference for their design, their performance characteristics and finally your budget. The Lexus is definitely the cheaper alternative and sports a hybrid version with superb fuel economy but the Acura has better high speed handling and a three row seating. So it depends on your priorities because both SUVs have awesome value for your money.

Odoala Chukwuemeka is an automobile content writer at Naijauto.com. He loves every machine that moves and hence has a deep passion for cars and the technological marvel behind them. He's also driven and inspired to create informative articles detailing the nitty gritty on several car models in Nigeria. His other hobbies include poetry, photography and Shotokan Karate.