Led by “Relentless Pursuit of Perfection,” Lexus give its RX300 a complete makeover for 2004. As such, the huge sale success in the Lexus lineup received an array of radical improvements including a more aggressive 3.3-litre V6 and an ensuing name: RX330. This article is Naijauto's 2005 Lexus RX330 review with an aim of providing comprehensive information of the Lexus's most popular model in Nigeria. Read on and enjoy!

As the first-generation RX’s styling was considered lacking the necessary boldness, Lexus stylists have given Lexus RX330 a sharper looking grille and rearmost roof pillar, which bring a more visual attitude. At the same time, with the engine receiving more power, backseat room being expanded, fresh high-tech features being added and handling being made tighter, the RX330 has been significantly improved from inside and out. Having said that, the Lexus team were cautious to retain the long-loved features such as a smooth drive, a gorgeous cabin, exceptional built quality, a peaceful performance on the road and a formidable reputation for reliability. 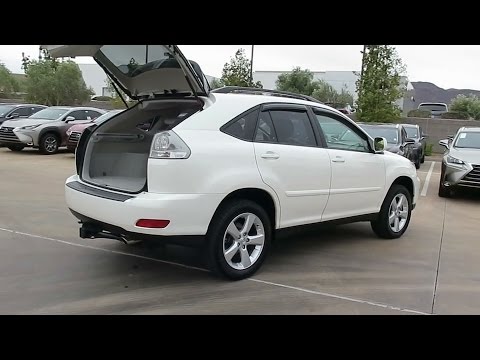 The 2005 Lexus RX330 won’t disappoint a Lexus fan when it comes to driving experience, as it delivers all the Lexus hallmarks such as the smoothness and sophistication. Despite the occasional moments of confusion while dealing with the five-speed, the overall performance is very firm.

Sharing many features with the Toyota Camry platform, the RX330 2005 is powered by a V6. With 3.3 liters, the  2005 Lexus RX330 engine is able to yield up to 230 hp and 242 lb-ft of torque, 10 hp and 20 lb-ft over those on the previous models. The more sturdy torque is comfortably controlled by the 5-speed automatic transmission, giving the RX330 more energetic merging and overtaking ability. The RX330 is offered in front-wheel or all-wheel drive. Pitifully, its 3,500-pound towing capacity is retained and seems insufficient for a truck-based SUVs.

Sharing many features with the Toyota Camry platform, the 2005 Lexus RX330 is powered by a V6. With 3.3 liters

The RX330’s maneuverability remains refined and tranquil as its predecessor, but more athletic. Significantly stronger acceleration is felt, and the handling is much tighter if the car is armed with the air suspension. However, the RX was not such an engaging drive as some other Japanese rivals which offer exceptional feel on the steering wheel and excellent response.

The 2005 Lexus RX330’s maneuverability remains refined and tranquil as its predecessor, but more athletic

Those who see driving is more of an excitement rather than a daily task should know that the RX330 is not made enough to be an SUV with a sport sedan attributes. So if you are seeking thrills behind the steering wheel, you should better opt for some other cars that trade off sensible features such as cargo and passenger space for a sportier ride. But for the larger majority of tokunbo luxury SUV buyers who just looking for a hassle-free and comfortable driving experience, the Lexus RX330 is unrivaled.

From the inside, the 2005 RX330 features chrome-bordered gauges providing essential information. Tapering into the eye-catching center console is an angular center pod housing climate controls and audio-navigation system. The 2005 Lexus RX330 interior is dominant by faux metal surfaces in combination with rich wood detail which brings it a luxury theme. A companying its sleek interior is a youthful, sporty cabin. Rear passengers will feel comfortable with a 40/20/40-split rear seat which is able to recline and slide for maximum comfort even on long journeys. In the back, the RX330 offers 38.3 cubic feet of luggage bay, and an additional 85 cubes once the seats are folded down. Powered liftgate also comes standard.

From the inside, the 2005 Lexus RX330 features chrome-bordered gauges providing essential information

Users were also better protected with a tire-pressure monitor, a driver knee airbag, side curtain airbag and a larger side airbag.

Accompanying its sleek interior is a youthful, sporty cabin

The 2005 Lexus RX330 is among the most sought-after models by Nigerian tokunbo car buyers. Below is Naijauto advice on what look for before reaching your purchase decision.

The Lexus RX330 boasts very high build quality so few troubles are reported, but its machines are quite complex ones and we strongly recommend you have a professional look on the one you are going to buy after you have your own careful inspection. Even though it is rarely used for off-roading, for any 2005 Lexus RX330 2005 problems, you should check for any signs of it under the sill panels, on the bumper corners, and any scratches on the doors. If there is any, unless the price is good, we suggest you look at another RX330 instead.

If the mileage is high, do look for a smoking exhaust, especially when the engine is put under hard work. Do hard acceleration to check the automatic transmission. And look over the boot and interior to see if the car was a taxi.

From the outside, if the paint is faded then the car might not be kept in the garage very often, which can hurt not only the interior but also the body.

Also, please consult the latest fair market price for the Lexus RX330 and its siblings from the Lexus RX lineup below.

Please refer to the below table for the 2005 Lexus RX330 price in Nigeria. We also provide prices of other model years for your further information and consideration.

Take all of the above discussion into consideration, following are the brief 2005 Lexus RX330 pros and cons:

We at Naijauto.com do hope that our 2005 Lexus RX330 review has provided a comprehensive look of this popular model from Lexus car marque. If you are interested in other models, visit our Reviews category for more inclusive reviews of the hottest cars in Nigeria.

>>> Click to explore more in-depth reviews of the hottest cars