SUVs are a popular vehicle type in Nigeria, accounting for millions in sales from happy customers. When two SUVs seem to have almost the same features and performance level, it is quite a task to make a choice between them. One way we can determine which one is tops is by comparing them using reviews.

No doubt, the Honda Pilot and the Edge Ford SUVs have gained quite a number of loyalty from happy customers.  Each of the moderns has had a good run up to its 2010 model being well accepted by buyers. If you are interested in purchasing the 2010 Honda Pilot or the 2010 Edge Ford, can’t quite decide the features and model you prefer, let’s help you at naijauto.com to make it easier to finally choose.

The second generation of Honda Pilot gave birth to the 2010 Honda Pilot, which is an eight seating, 4 doors vehicle from first introduction in 2002. After its 83,901 sales in 2009, Honda continued the production of this mid-sized SUV with some upgrades in the 2010 model. This was to ensure good quality features to enhance sales and keep customers happy

The 2010 Honda Pilot belongs to the second generation

The 2010 Ford Edge is the first generation, after the first model started production in the year 2007, and was built on the Ford CD3 platform as a 4 doors, five-seat car. One remarkable thing about Ford’s 2010 Edge is that, though the automaker came late to the production of mid-size SUVs when compared with other mid-size SUVs companies, the Ford Edge still maintained a place in the top space when listing the best mid-size SUVs in that year, or any year for that matter.

The 2010 Ford Edge is a new face in the midsize SUV segment then, but it still claims a top place

Despite notable improvements on its beauty, the Pilot needs more to catch up with the exterior aesthetics of the 2010 Ford Edge

Their external design gives them each a different body size measurement:

5.1. Cockpit: Basic features for both models

While they both have a comfortable, roomy interior with a moderate appearance, the 2010 Pilot’s cabin is larger in size than the 2010 Ford Edge’s. One thing they both have in common when it comes to design, is that the quality of materials used in making their dashboard is on the average and does not carry any classic touch. While other features are in standard, they have similar infotainment systems which comprise:

5.2. Seats: Go for Honda Pilot if you have a large family!

The Ford Edge is a two-row 5-seats SUV. Compared to the the Ford Edge, the Honda Pilot has a 3-row seat arrangemnt that can take 7 persons; 6 passengers and a driver. This makes the Honda Pilot seating arrangement decidedly more attractive, especiall for a large family. SUVs are traditionally large haulers and the capacity to carry more is a sure asset.

5.3. Safety: Basic features for both models

When you are you looking for an ‘extra’ in safety features, you might not be able to totally find it in either the 2010 Ford Edge or in the 2010 Honda Pilot. This is because these mid-sized SUVs’ safety features are just standard. The safety features found on both are:

There seems to be a few important safety features missing in the two and these include the in-vehicle assistance service, LED brake lights, lane-departure warning, blind-spot monitoring system and the forward collision warning. However, when it comes to safety, you can rest assured you are in good hands with Honda cars. See Reasons why Honda vehicles are among the safest.

Here are prices compared for both vehicles:

Both the 2010 Ford Edge and the 2010 Honda Pilot seem to be great SUVs good for the Nigerian climate and roads but if you have a small size family and are especially keen on styling and design, then the 2010 Ford Edge will be a better choice as it is a 5-seats vehicle. The 2010 Honda Pilot may not have that touch of styling like its counterpart but it is very suitable for a large family with good cargo space, as it is an 8 seating vehicle with an adjustable third row seating. Another thing you should always have in mind is the availability of the car parts in Nigeria and fuel economy. The Honda Pilot has a slight “edge” here. Happy driving. 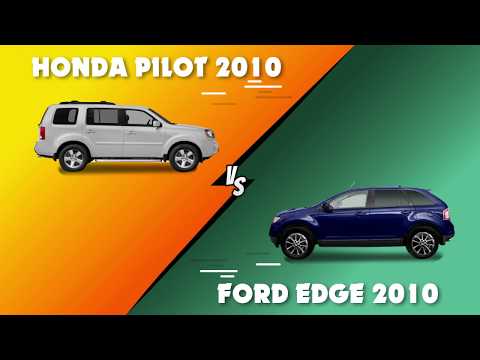 >>> Find other interesting reviews and car prices on naijauto.com