Review of Honda Bulldog features and prices in Nigeria

In the 1970s when the Honda Accord was launched, little did people expect it to do better than the competitors it had at the time. It didn't even have that much cargo space or passenger room but it made up for all that in power and uniqueness. One of the best selling versions of the car in Nigeria is the Honda bulldog. This is the version made between 1994 - 1997. 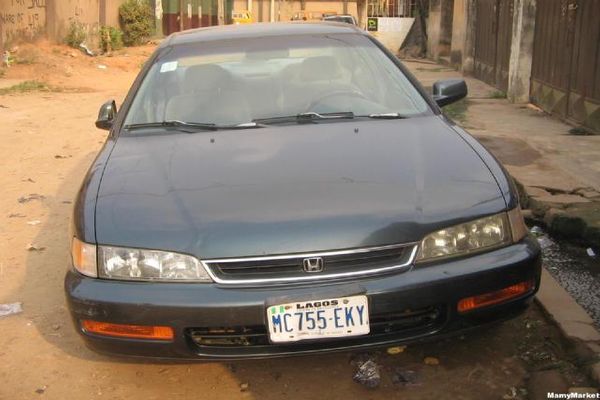 This 5th generation Honda Accord comes in 4-door sedan, 4-door wagon and 2-door coupe. It has 3 trim levels and was quite fuel-efficient. Though you may hardly find a brand new unit of the car but the fairly used ones are still strong and reliable - hence the moniker. Without taking much time, let's delve right into the review and prices of the Honda Bulldog in Nigeria, brought to you by Naijauto.com!

2. Trims and prices of Honda Bulldog in Nigeria

The Honda Bulldog comes in 3 trims - the base (DX), EX and LX. The base does not give you special features as everything is basic. But when you get the EX or the popular LX, you enjoy power accessories, firmer suspension, 15-inch alloy wheels and much more. An SE trim was added in the 1997 version of the car.

It is rare, if not impossible, to find brand new Honda Bulldog now, though you can visit Accredited Honda dealers in Nigeria to find one. Also, if you have a more generous budget, you can consider buying the latest version of Honda Accord that won The Best Car of the Year.

Meanwhile, you can drop by a used car market or used car dealer to find a Tokunbo or Nigerian used unit with affordable prices.

The foreign used prices may change due to currency exchange rate and custom clearing cost. The car condition is generally acceptable given the car maintenance habit of Western people.

Take these costs for reference only as buying costs may vary thanks to your negotiation skills. Be noted that the cost for clearing range between 70% and 50% of the car price.

If you need to save cost, go for a Nigerian used Bulldog but make sure you know how to inspect a second-hand car. As Naija car owners don't often maintain their transport, a locally used car might cost you some extra amount to fix underlying problems.

All in all, the Honda Bulldog isn't bad for a middle class family with 3 kids. What it doesn't have in comfort and space like the Toyota Camry and Ford Taurus, it makes up for in fuel economy and engine performance. It's affordable an easy to maintain. However, if you wish to purchase, I advise you buy the 1996 - 1997 version of the Honda Bulldog. They have a lot more to offer in accessories, performance, efficiency and safety.

You can view thousands of them for sale in one place, get the best prices while saving time and effort. Cotonou, Benin Republic is also a feasible option to hunt for an affordable tokunbo Honda Accord if you like to travel and challenge yourself.

The Honda Bulldog is a bold car with thick pillars and chrome grille. There are also redesigned parking lights and bumpers from the 1996 upwards. The SE trim in the 1997 model comes with CD player, remote entry, alloy wheels and power moonroof. Others still had the cassette tape player and normal entry. The cabin looks pretty organized without the levers, switches and buttons littered everywhere. There's the airy feel that comes with handling the Honda bulldog, regardless of year. 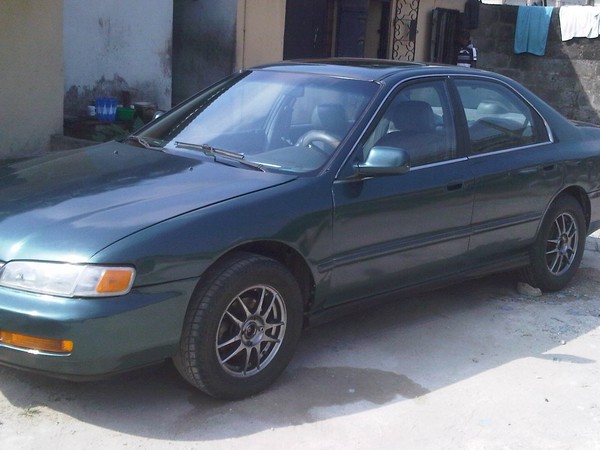 Though the Honda Bulldog may seem old school, but it has an impressive interior

Though it doesn't have enough space as the Ford Taurus or Toyota Camry made within the same period but it's still ranked in the list of automobiles that can handle 5 passengers. The car is quite compact and would be nice for a family of 5 - with 3 kids. The rear seat are comfortable and the front seats are firm, they can be adjusted up, down, back and forth. 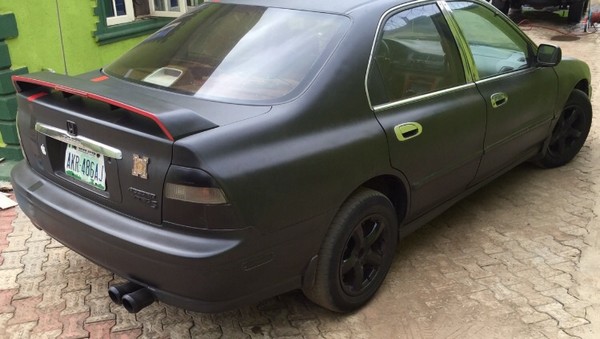 The rear seats have child safety locks and there are dual front airbags. Though it didn't get up to 5 stars in crash tests conducted, it's still a reliable car and has great anti-lock brakes to help prevent accidents. 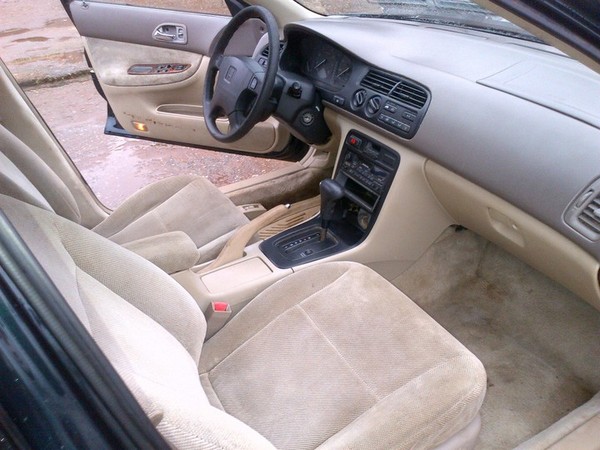 Take a look inside a Honda Bulldog!

All trims of the Honda Bulldog come with a 2.2 liter SOHC engine. You now have the option of a VTEC or 4 cylinder engine. The most powerful obviously is the EX trim which is a VTEC engine that puts out 145 horsepower. This is 15 HP better than what is obtainable in the LX and DX trims. The car comes with a 17-gallon fuel tank (about 52 liters) and can go up to 60 miles per hour in 10 seconds. You can also get either the 4-speed automatic transmission or 5-speed manual transmission - which is the most popular.

The Honda Accord made between 1994 - 1997 definitely has some advantages. It has comfortable seats and safety features that ensure occupants don't come across harm. In fact it's believed that the Honda bulldog somewhat has bullet proof abilities. This is perhaps because of how thick the metals are and the solid look it has. The car is quite efficient and has speed when compared to rivals made around the same period. However, there are cons. First of all, the rear seat isn't comfortable for 5 adults at a time and the leg and shoulder rooms are pretty tight. The exhaust pipe isn't stainless steel, and that makes it easy for the system to get faulty or even corrode. But all in all its an "okay" ride.

5. How to buy and maintain used Honda Bulldog

When buying the Honda Bulldog, there are quite a number of things to look out for. Firstly the tire pressure valve. Sometimes it gets lose and causes the tire to go flat which can lead to an accident when you're driving. When you notice this, notify the seller to get it fixed as soon as possible.

Check if the airbags are still there. Due to electronic malfunctioning, the airbags in the 1996 versions easily deploy on slight impacts so many sellers remove theirs entirely. 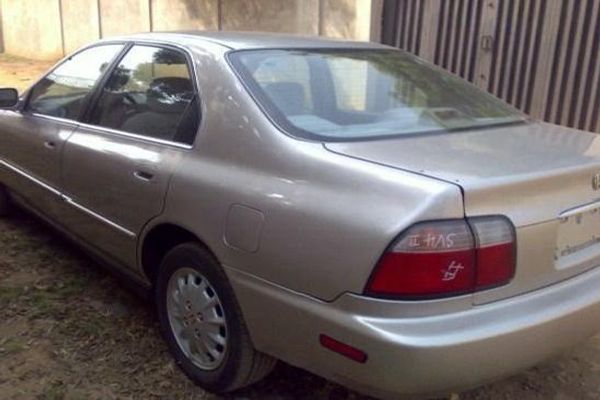 Check to know if the one in the car you wish to buy ia still there. Look out for blue smoke too, if there is, avoid the car. Have your mechanic look out for leaks and stiff transmission. Honda Bulldog hardly has issues with the transmission, it's always smooth. Therefore, anything different is a red flag.

When bought, maintaining the Honda Bulldog isn't a herculean task. Simply ensure fluid levels are maintained, the car undergoes routine maintenance and the shocks are replaced after a while. Change the timing belt too after 90,000 miles and engine oil after 7,000 miles.

Standing the test of time of over a decade, Honda Bulldog is among the most popular cars on Nigerian streets. Buying a Bulldog is not a difficult task given the large used car market in the country as well as its affordable price. What should concern you is how to detect a reliable Honda Bulldog when inspecting a used car.

Hope our above review of Honda Bulldog in Nigeria is helpful to you. Should you look for used cars for sale, don't forget to check Naijauto cars for sale section.

>>> Read more car reviews and car buying tips on the website as well!

Latest update on Honda Accord 2008 price in Nigeria