Shocking: Woman pulled out of a burning car after crashing into stone wall

A 65-year-old woman was pulled out after she drove into a stone wall and the car went up into flames in Cohasset. See full details!

According to the local police, tragedy was recently averted when a 65-year-old woman was pulled out of her burning vehicle by people around after crashing into a stone wall in Cohasset, Massachusetts, United States.

The witnesses rushed to her rescue, pulling her out of the burning car in Cohasset

From further reports, the police officers and firefighters in Cohasset responded quickly to the fatal, one-car accident that took place around 4:20 pm last Saturday, after a series of distress calls were made prior to what happened at the intersection of Hull Street and Jerusalem Road.

>>> See also: Woman hits her boyfriend with a car, set to face charges

From the information that got to us, a Mercedes-Benz car approached the intersection at high speed, where it ended up smashing into a stone wall and going up in flames. The authorities revealed that the neighbours and eyewitnesses rushed to help the driver, who at the time was stuck in the vehicle. The 65-year-old female driver was treated at the spot by paramedics before she was taken by an ambulance to a Boston hospital. She reportedly sustained severe, life-threatening injuries from the crash.

Meanwhile, here is the clip of another shocking incident where a woman was pulled out of a burning car: 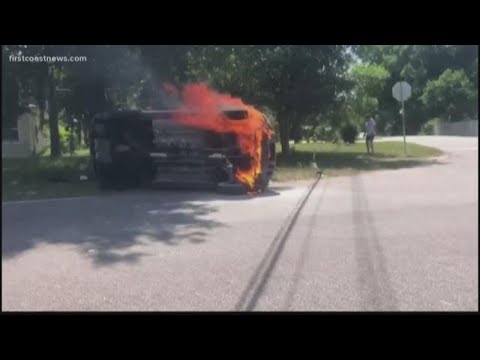 So far, the police have not revealed the identity of the woman in question. However, we were made to understand that she is a resident of Cohasset. The car fire was eventually extinguished by men of the Cohasset and Hingham Fire Department. It was further added that the result of the on-scene investigation reveals that the woman was driving at high speed under the influence of alcohol. An investigation is still ongoing on the horrific road crash.