Some group of people who are suspected to be hoodlums took advantage of a protest conducted by Federal University of Oye Ekiti (FUOYE) students and attacked the convoy carrying the wife of Ekiti State Governor, Mrs. Bisi Fayemi.

Reports gathered by Naijauto says the police opened fire on the protesters and ended up killing two persons.

Mrs. Bisi Fayemi was reported to have gone on a tour around the 16 LGAs in the state, with respect to her empowerment programme.

The students had done the protest in the morning over incessant power outage, seeking assistance from the federal government and dispersed. The hoodlums were said to have taken over in the afternoon. There was a violent clash between them and security operatives as they vandalized all the vehicles lined up in the convoy. The hoodlums also burnt a police vehicle and snatched two rifles belonging to the policemen.

>>> Mob justice is always a tragedy! Sop it now! Xenophobia: dealers' 40 cars worth ₦48.78m burnt to the ground in Johannesburg

The governor's wife escaped being attacked as some armed security personnel whisked her away to safety. However, the three journalists in her convoy weren't lucky as they were attacked, sustaining some injuries.

The hoodlums got a hint of Mrs. Fayemi's presence in the area and regrouped themselves to attack the convoy. 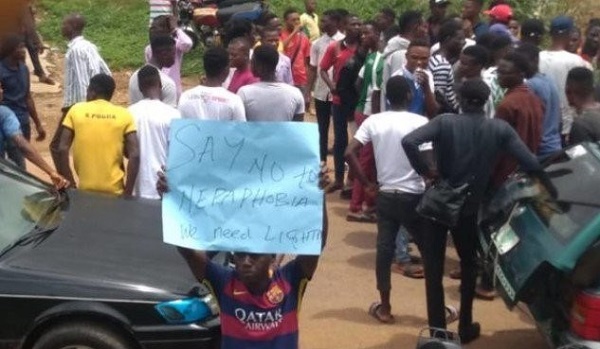 The protesters as they were blocking the road

"The students did not allow vehicles to move freely and they allegedly vandalised the property of the Benin Electricity Distribution Company (BEDC).

When police went there to dialogue with them, they resisted them. And the wife of the governor who went on a Local Government tour, ran into the barricade mounted on the road.

The students were reported to have been violent, destroying cars and smashing the windscreens of vehicles.

At this stage, we were warning that the command would not tolerate hooliganism under any guise.

We want to assure the public that the police are on top of the situation and our people must go about their normal businesses."