Stefflon Don is an activist, rapper, entertainer, and Burna boy's boo. The Stefflon Don net worth is also very impressive. Learn more about her! Read on!

Stefflon Don, aka, Stephanie Allen, is a Jamaican-British rap artist, musician, and composer who came to prominence since her 2017 single "Hurtin' Me" starring French Montana reached number 7 in the UK Singles Chart. When she sang with French Montana, Stefflon Don net worth and fan base skyrocketed, and she is also a girlfriend to Nigerian star Burna Boy.

Stefflon is a mix of Dutch, Jamaican, and British in her style of music

Stefflon Don, artist to the world

Stefflon Don is now on the outskirts of global acclaim, and 2018's most electrifying and diverse new act is the energetic, multilingual, talented, and beautiful rapper, musician, and lyricist.

Stefflon Don’s accomplishments in the last 24 months, especially the very last 12, are pretty astounding. Her strong presence commands respect both on record and also in reality, from BRIT Critics Choice to BBC Sound Poll.

With a long list of notable collaborations supporting her, including Skepta, Future, and Charli XCX, this intriguing 26-year-old MOBO winner is a musical force to reckon with.

Stefflon appears completely at ease in any genre she's given, be it pop, rap, bashment or grime.

That may be why so many artists have expressed interest in working with Stefflon, and these were not established by management or media platforms; they're real friendships established in the last few years. Simply put, real people recognize real people.

If you gat that money, flaunt it, she seems to say

Not much seems to be known or visible about Stefflon Don’s cars, but we know she uses the best of cars in her videos and pictures.

Which ones belong in her personal fleet is difficult to say at the moment. Keep watching this space, and we’ll be sure to bring you the latest car updates in her life.

Stefflon incorporates many cars into her shows and videos

On Episode 1 of MTV Cribs, British musician, rapper, and composer Stephanie Victoria Allen – best known by her nickname Stefflon Don – invites us into her house.

Her home boasts ten bathrooms, a luxury wardrobe, a spa, as well as an English country garden. She shares the house with seven others, including her mum, sisters, brothers, and son. Stefflon Don even has a hidden refrigerator that resembles kitchen cabinets.

A big house for a big dame!

Birmingham is where Stefflon Don was born. She has Jamaican ancestors. She has six brothers and sisters, one of whom is Dutchavelli, a rapper.

Allen's family had relocated to Rotterdam whilst she was five years old (which is also why she's so fluent in Dutch), but she moved to the United Kingdom at the age of fourteen to attend a London school. Since elementary school, Allen has been performing and writing music.

She posted a "Hard Knock Life" hook for rapper U-Niq when she was nine years old. Although the song was never written, she was taken aback when she heard her own voice on the replay. Prior to pursuing a music career, Stefflon worked as a cake designer and a hairstylist.

Steff and Jaylen, her boy

After crossing a billion views as a musician, Stefflon Don had a giveaway on Twitter in September 2019. Shocka, a British artist, contacted Stefflon Don and informed her that he is presently in Nigeria and that his mom is receiving treatment for her cancer.

She made the decision to donate the funds for Shocka to care for his mother.

Burna Boy's affair with Stefflon Don has become the subject of a social media firestorm, with claims of him cheating on her with side chicks and overlaps.

Here is a summary of their past relationship. Jo Pearl said on Instagram that she had been in a romance with Burna Boy for a whole 2 years.

She claims they have always been together in 2018 and that she thought they still had something together when he left for Nigeria.

After missing her flight, Stefflon Don saw him live at a show in Ghana in 2018 for the first time, and the two became friends. Stefflon Don recalled the following in a June 2019 interview:

“I met him in Ghana, I was in Africa for a show and missed my flight; he had a show where he played, and I went to the show; the rest, as they say, is history. He told me I was going to be his wife, and you know how boys talk s***, but I don't recall him saying that, but he did, and I was like, wow.”

In 2019, Burna Boy and Stefflon affirmed their relationship with a number of Instagram posts, and one especially from Stefflon that read, "Relax people, he ain't hit yet, but that's bae."

Stefflon and Burna boy hang out at an event

Also, in October 2020, allegations of turmoil in paradise arose just after Stefflon and Burna Boy unfollowed one another on Instagram, which in today's world could only indicate one thing: trouble.

Burna Boy still perplexed his fans in November 2020 when he posted a snapshot of Stefflon's song with the description "This" and he added fire emoji.

Burna Boy addressed his life with Stefflon Don as well as the prospect of having children in July 2019, saying, "It's not the business aspect of us, and it’s our life."

>>> You may also like to see the 10 richest musicians in Africa – What you will find in their garage will stun you!

She went on to star in tracks by well-known artists such as Sneakbo's "Job," Lethal Bizzle's "Wobble," and Angel's "Hop On." She also went on to appear in Jeremih's track, "London." Jerimih later featured in Stefflon Don's song "Tight Nooki."

Stefflon Don dropped a mixtape titled ‘Real Ting' later that year. The name of the same-named mixtape attracted a lot of attention on YouTube, with millions of views.

The song's success attracted the attention of record companies, and she ultimately signed a contract with 54 London, a Global affiliate label, in March 2017. According to Stefflon Don, 54 London was specifically designed for her.

She debuted ‘Hurtin' Me,' the lead single from her latest Extended Play album (EP), on August 15, 2017, in collaboration with rapper French Montana. On January 12, 2018, the EP was finally released.

On January 12, 2018, the EP was finally released. She collaborated with Rapper, Big Sean on Halsey's song Alone in March 2018. The single was her first to chart on the Billboard Hot 100, where it peaked at number 66.

The many shades of Stefflon Don

The track also made her reach the top of the Dance Club Songs chart for the first time. On August 18, 2018, Stefflon released a new mixtape called ‘SECURE' under the name 54 London. Fekky, Dj Khaled, Sean Paul, Sizzla, Future, and Ebenezer were among the artists who appeared on the mixtape's tracks.

The tape's lead single, 'Senseless,' reached number 63 on the UK Singles Chart. She made an appearance in the remix of Mariah Carey's song "A No No" on her album "Caution" in March 2019.

See a video of Stefflon and Burna boy on the beach: 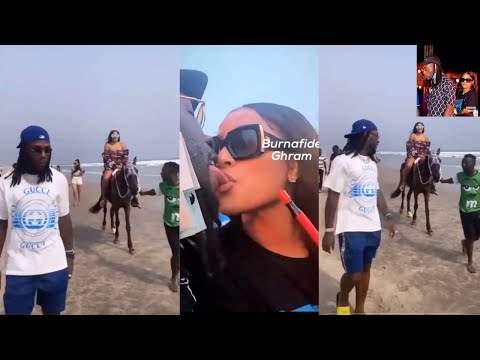 Stefflon’s live performance is a seamless mix of London, America, and Jamaica. If she was a Nigerian, she would surely be among the richest artists in Nigeria.

Stefflon Don net worth demonstrates that she is on her way to becoming a household name in the entertainment industry. As a result, people should be on the lookout for her!

Who is Stefflon Don?

Stefflon Don is a Jamaican-British rap artist, and musician.

What is Stefflon Don's net worth?

Who is Stefflon Don dating?

Stefflon Don is in a relationship with Burna boy, a Nigerian singer.