6 persons have been confirmed dead, three currently in the hospital in a two-vehicle fatality crash in Texas recently. See full details!

From the latest report reaching us, in a horrific car accident in Mathis, Texas, 6 people lost their lives while 3 are currently in hospital after sustaining serious injuries. The case as we speak is being investigated by the Texas Department of Public Safety.

At least six persons died, others hospitalized after a fatal two-car accident in Texas

According to report, the unfortunate incident occurred on the 23rd of January 2021 around 3:33 am on the IH-37 half mile east of Mathis, San Patricio County. The Department of Public Safety during the course of their enquiry discovered that the Toyota Camry driver in the company of another driver and 3 passengers were moving southbound in the IH-37 north route when the car hit the Dodge van on the left lane.

As a result, 5 people were found dead at the scene of the accident, where one of the victims was reportedly ejected from the vehicle. The victims of this horrific crash have been identified as Trent Ryan Edge (19yrs), a passenger of the Dodge van and a resident of San Antonio in Texas, Noam Caleb Ortiz (19yrs), driver of the Toyota Camry and a resident of Alice.

Watch the video below: 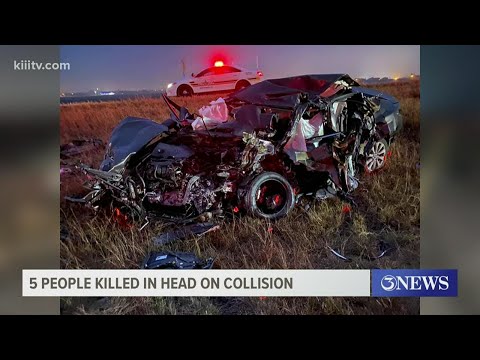 According to the DPS troopers, 4 people were sent to the Spohn Shoreline in Corpus Christi. Just shortly after their arrival at the hospital, Helena Paige-Marie (18yrs) was pronounced dead. We learnt they had set up a Go Fund Me accounts for the 3 residents of Alice in Texas involved in the accident.