Car robbers have devised another way of stealing people's cars. This time around, from a car wash stand in Lagos. Read their narrations below!

Two suspected car robbers that were arrested by the Lagos Police Command have revealed how they steal people's cars from the wash points where they are taken to be washed. Reports gathered by Naijauto say the two suspects identified as Godspower Imafidion (25) and Gideon Amuzie (25) were arrested by police officers from Ilemba Hausa Division.

The notorious thieves said that many car owners willingly release their car keys to car wash stand managers in Lagos. This makes stealing cars from there easy.

"What we do is to search for job in any car wash stand. When we are recruited, we pretend to be good and at the same time let the manager know that we can drive. We will then run away with the car the moment any of them is entrusted in our care." 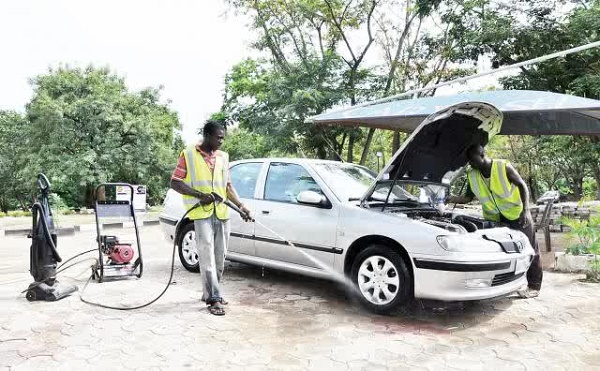 Detectives started looking out for the duo after they stole one of the cars kept at a wash stand located in Satellite Town, Lagos.

According to reports, the two-man gang went to the car wash stand under the pretense of searching for a job. There, they stole a Honda Accord car after detecting that the manager wasn't around. The PRO of Lagos State Police Command, Bala Elkana, pointed out that the duo were notorious car robbers.

The suspects specialize in snatching vehicles from the owners or stealing the vehicles from where they are parked. They confessed that they stole the vehicle at a car wash in Satellite Town, Lagos.  Investigation is on going."

>>> Be in the know of other auto news trends and updates. See our news section