Amidst the rising level of insecurity on Nigerian highways, the police in Oyo state recently arrested 3 notorious armed robbers that have been terrorizing travellers along the Oolo expressway in Ikoyi-Ile. The spokesperson of Oyo state police, Adewale Osifeso revealed the names of the arrested suspects as Mohammed Bawa, Abubakar Isah, and Mohammed Ishaku.

According to the Oyo state police spokesperson, some officers of the Ikoyi-Ile police division in Oyo state apprehended the 3 suspects during their latest highway robbery operation. Adewale Osifeso disclosed that the suspects were arrested around 9 am in the early hours of Saturday 24th of April 2021 following credible intelligence received by the police. He further highlighted the items recovered from the arrested suspects as follows:

>>> In other news: [Photos] Suspected car thief apprehended while stealing a Toyota Camry from a church

The spokesperson of Oyo state police also mentioned that one Tunde Kazeem is currently receiving treatment at Bowen Teaching hospital in Ogbomosho after being inflicted with injuries by the arrested highway robbers. The Commissioner of Police in Oyo state has also assured the general public that subsequent developments on the case of these arrested highway robbers will be communicated via media sources as further investigations continue.

Meanwhile, this report is coming just a few days after the Oyo state police similarly paraded a group of suspected armed robbers and hoodlums in Ibadan, the capital city of Oyo. Watch this video below to see the suspects that were earlier arrested in Ibadan. 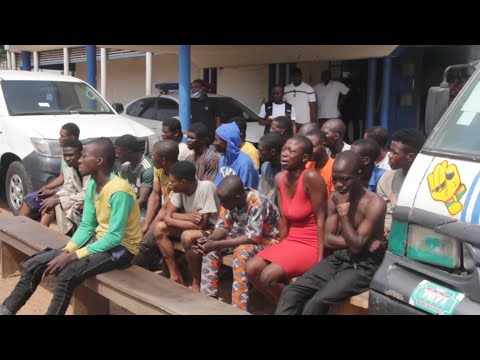