An unidentified man was reportedly burnt to death in a recent fire outbreak caused by a horrific car crash involving a tanker and 4 trailers. Read more!

Fresh reports from Kwara state claimed that a certain unidentified man recently died in a fire outbreak that followed a ghastly road accident involving one petrol tanker and four different trailers. This horrific accident reportedly occurred around 9 am in the early hours of Monday 26th of April 2021 along the Bode-Saadu-Jebba expressway in Moro LGA, Kwara State.

Mr Hassan Adekunle, the PRO of Kwara State fire service, says that the horrific accident was a result of a head-on collision between the heavy-duty vehicles which were being driven at very high speeds by their drivers. He explained that the fire which broke out after the accident destroyed the petrol tanker and the variety of goods that were loaded at the back of four trailers involved in the crash. Mr Hassan Adekunle went further to confirm that a certain unidentified man also lost his life after being caught in the massive fire which burnt him up beyond recognition.

According to Mr Hassan Adekunle, some men of the Kwara state fire service rushed to the scene of the ghastly crash and were able to put out the raging fire before it could cause bigger damages than what it had already done. Press reports also claimed that Prince Falade John Olumuyiwa, the CFO of Kwara state fire service, advised commercial transporters to be more careful whenever they are behind the wheels because these types of incidents are heartbreaking.

Meanwhile, just a few days ago, a certain petrol tanker reportedly exploded in Benue state and caused a massive fire outbreak which led to the death of many people as well. Below is a press video that gives more details of this earlier tanker fire accident report. 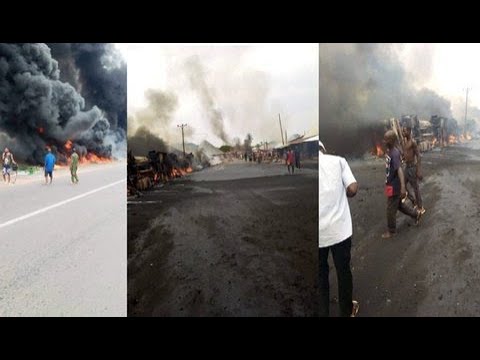 Many feared dead as fuel tanker explodes in Benue