The Delta State FRSC command has been thrown into deep mourning after a Toyota Camry sedan killed one of its officers in a ghastly accident. Read more!

The FRSC command in Delta State has been reportedly thrown into mourning after losing one of its officers in a horrific accident that occurred during the evening hours of Monday, April 26. Press reports claim that the deceased officer was crushed to death by a speeding Toyota Camry sedan that rammed into the FRSC patrol van that was parked on the road.

According to media reports, this heartbreaking accident occurred somewhere around Ekrerhavwe-Agbarho junction, along the busy East-West road in Delta State. An eyewitness claimed that the speeding Toyota Camry sedan had a plate number (AGL 405 GJ) and was travelling from Warri. The eyewitness also stated that A0/1-882 RS was the plate number of the FRSC patrol van which the speeding Toyota car rammed into.

When giving details of this horrifying incident, the eyewitness claimed that the FRSC patrol van was split into two different parts when the Toyota Camry sedan rammed into it. One of the FRSC officers inside the patrol van reportedly died at the spot of the accident while two of his other colleagues in the van suffered varying degree of injuries and they were rushed to the Central Hospital in Ughelli, Delta State. As of the time of writing this report, Mr Uchechukwu Wihioka, the Sector Commander of FRSC in Delta State has confirmed this incident report to be true and also disclosed that the driver of the Toyota Camry sedan has been arrested.

Speaking of recent traffic reports, many friends and family are still mourning the death of a certain newly-wedded man who died in a recent ghastly accident in Ondo state. Below is a press video that gives more details of this report. 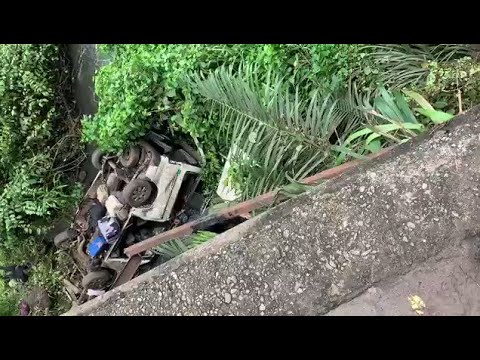 Newly-wed man, four others die as 18-seater bus plunges into river in Ondo