Several auto parts traders were thrown into deep sorrow on Saturday, April 3 after a massive fire outbreak reportedly razed some shops at a popular auto spare parts market in Ibadan, Oyo state. Reports have it that several automobile parts that worth millions of naira were destroyed by the fire incident which torched a huge number of shops and outlets at Araromi Auto spare parts Market.

According to eyewitness accounts, the terrifying inferno raged from midnight till 10 a.m in the morning before Oyo State firefighters could finally put it out. The eyewitnesses claimed that the firefighters responded promptly but they were unable to put out the fire quickly because several vehicles parked indiscriminately on the road blocked free access to the burning market. This “annoying” hindrance forced the fire servicemen to park their water trucks at a close distance to the burning area and drag the hoses to the scene of the incident to put out the fire.

>>> In other news: Firefighter removes a swarm of bees from a car after grocery shopping

Many traders that granted press interviews claimed that they suspect a power (electric) surge must have started the fire in one of the shops. This assumption is based on the fact that the market was said to have been cut off the electrical grid for many years until recently when their supply was restored. One of the traders in the affected market also revealed that such a fire incident like this had only happened once in the past 38 years.

Below is a press report video showing the scene of the terrifying fire incident in Ibadan. 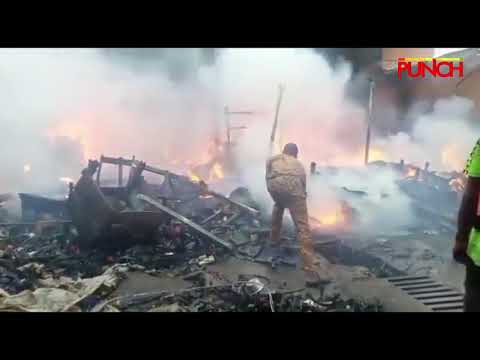