Cubana Chief Priest's birth name is Pascal Chibuike Okechukwu. He is a born show promoter, a millionaire, and a businessman. Cubana Chief Priest net worth makes him worthy to be listed among the richest artists in Nigeria. This grew as he worked for Cubana Groups. He now owns Club Xhrine in Owerri. Club Xhrine was established in December 2020, after he resigned from Cubana Groups as General Manager in 2020.

Cubana Chief Priest hosted the biggest event ever seen in Owerri, with Omo Baba Olowo, who is also known as Davido hosting the Launch Party. The Cubana Chief Priest is a hardworking and determined man with a fiery temper. He vacations in Dubai, Malaysia, and the United States, as well as other European nations, with his family members and friends.

Cubana Chief Priest is a Nigerian entrepreneur with a net worth of ₦1.2 billion, according to reports. He was able to accomplish these statistics as a result of his prosperous career as a businessman and show promoter, which included prominent endorsements from brands such as Bullet Drink.

Being rich has its special perks, like constant luxury

The Cuban Chief Priest is a multimillionaire who possesses a Rolls Royce Phantom, a Range Rover, a Mercedes c-Class, a Toyota Prado, and other luxury vehicles.

Although the Toyota Land Cruiser has a legendary off-roading reputation, the new model appears to be more luxurious than adventurous. Despite this, this massive two-or-three-row SUV remains well-built and capable.

A 5.7-litre V-8 engine with an eight-speed automatic transmission drives the Land Cruiser. This combination produces 381 horsepower and 401 pound-feet of torque. Four-wheel drive is normal all the time. The Land Cruiser provides relaxed driving characteristics with its smooth and well-planted ride quality. The steering, on the other hand, is light, and there's a lot of body roll.

The Toyota Land Cruiser surely fits the profile of this businessman

The Range Rover has a spacious interior, powerful engines, and outstanding off-road mobility. Range Rover is an excellent luxury SUV. The Range Rover greets you with a library-like interior, premium cabin materials, and ample seating for five people.

When the going gets tough, this SUV feels pretty stable around turns and glides effortlessly over rugged road surfaces, but it still has a great off-road capability. The Range Rover's robust engine lineup allows for fast acceleration and also strong towing capabilities. Gas and diesel six-cylinder engines, a hybrid four-cylinder, and two V8s are among the choices.

Going off-road the luxury way with the Range Rover Autobiography

Ferraris are the stuff of fantasies. These Italian supercars are fast, sexy, and extremely exclusive, pushing the limits of performance and creating a stir everywhere they go. In terms of cost, the Portofino convertible is the most affordable, but even it is out of reach of the average.

With the mid-engined F8 Tributo supercar, the V-12-powered 812 Superfast, and the incredibly practical GTC4Lusso, things only get better.

An eager turbocharged six-cylinder engine is available, as well as a hybrid four-cylinder and a powerful supercharged V8. The cabin is finished in luxury materials and comes standard with leather upholstery, a dual touch-screen infotainment system, and a forward-collision warning. Passengers will find it reasonably comfortable, at least in the first and second line.

The Land Cruiser range includes a full-size four-wheel-drive vehicle. Toyota, a Japanese automaker, manufactures it. The Prado is among the most compact models in the lineup. The Prado has been focused on Toyota's J150 platform since 2009.

The ladder frame chassis, two-speed transfer boxes, and rear beam axles are all features of the Prado. Its front beam axle is found on the J70 platform, and the front balanced suspension is found on the J90, J120, and J150 platforms.

>>> You might also be interested in: Kanye West net worth, cars, and biography of the black rapper/entrepreneur

The LX offers a luxurious journey, comfortably overcoming road bumps and keeping its passengers relaxed. The Lexus LX is driven by a 5.7-litre V8 engine that produces 383 horsepower.

The LX is one of the best off-roaders in the class, thanks to full-time four-wheel drive and a slew of other features. It also has an adjustable suspension, crawl power, multi-terrain pick modes, and a front-view terrain camera that allows you to see the emerging hazards underneath the car's front bumper. The LX has a ground clearance of 8.9 inches.

The cabin, particularly that of the extended wheelbase model, is extremely comfortable and convenient. To create a palatial decor, only the best leathers, woods, metals, and materials are used.

Surely can't be a big boy in Nigeria without a Rolls Royce- make that 2!

>>> You may also like to read: 25 Highest paid CEO in Nigeria (net income, cars and other interesting info)

He's a real estate don, owning properties that are mostly hotels and clubs

Paschal Chubuike Okechukwu, the Cubana Chief Priest, was born on March 26, 1982, in Orsu, Owerri, Imo State. Brought up in Orsu, he is the second son of his parents and grew up with his siblings.

Pascal Chibuike Okechukwu eventually joined his dad in Aba, Abia state, whereby he learned to make shoes. According to Cubana Chief Priest, he earned his first million Naira from making shoes in his school years at Federal Polytechnic Nekede, Owerri, where he grew up with his siblings.

He developed a deep interest in music as a child in Imo and aspired to become a musician. Since then, he's been a big fan of Nigerian artists like Lagbaja, Sound Sultan, and many others.

He's collaborated with several artists and musicians, including Mercy Eke, the winner of BBN 2019, whom he supported on the recently ended reality show. Later, they seem to have had a falling out. Davido, according to Cubana Chiefpriest, has changed his life. On August 19, 2018, the Assurance singer performed in Owerri with his fiancée, Chioma.

Davido's success attracted a huge crowd to one of the Cubana chief priest's hotels, the Cubana Grand Hotel in Owerri, enhancing Cubana's popularity.

The 37-year-old has collaborated with a variety of Nigerian A-list musicians, including Davido, Wizkid, Burna Child, and others. As he seemed to pay special attention to one musician, in particular, Davido, whom he claimed turned his life around. On August 19, 2018, Omo Baba Olowo (Davido) performed in Owerri with his fiancee, Chioma, in front of a large crowd at the Cubana Grand Hotel. Cubana's popularity grew as a result of this.

With good friend, Davido, a partnership that resulted in good business

Obi Cubana, his former associate, owns the Cubana Group, which is a centre for entertainment and nightlife. They have two hotels: the Grand Cubana Hotel and  Rolex Hotel. Also, Cubana Night Club, Pablo Cubana, Crave Cubana, Opium Cubana, Gustavo Cubana, and Cubana Leisure are all part of the Cubana businesses.

Cubana Group has operations in Imo, Abuja, Lagos, Enugu, and other parts of Nigeria. Cubana Chief Priest has worked as a promoter with Davido, Wiz KId, Burna Boy, and a slew of other artists.

He has also been linked to business moguls such as E-money, Jowi Zaza, and others.

Cubana Chief Priest and his family, never too busy for them

See more in the video: 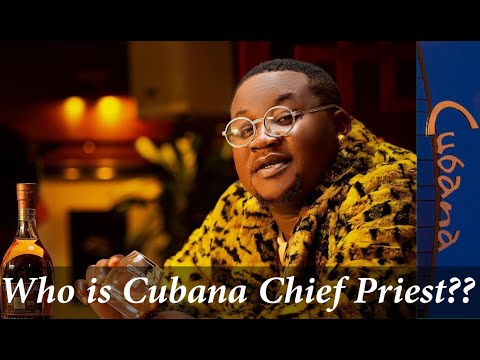 With Cubana Chief Priest net worth, he is engaged in charity, paying for uninsured students' school fees and giving money to pregnant mothers, which is incredible! The face of Cubana Chief Priest's late mother is noticeable amongst his body art on his right leg, and he has no fewer than four tattoos.

He was raised as a Christian and still follows it today.

>>> Continue to get the best Celebrity lifestyle and auto stories here

Who is Cubana Chief Priest?

Cubana Chief Priest is a Nigerian promoter and hotel owner.

What is Cubana Chief Priest net worth?

Cubana Chief Priest has a net worth of ₦1 billion.

Who is Cubana Chief Priest married to?