By Oluwaseun Adeniji
Publish on January 21, 2020

A commercial driver has been on the run ever since he recklessly crushed a police officer to death with his bus. Click here to read full story!

From a report reaching us on Naijauto, a 50-year-old police officer has been killed during a routine surveillance operation with his colleagues at a black spot in Agbara area. The officer died when a commercial bus driver lost control of his bus and crushed the policeman to death by ramming into him from behind.

The 50-year-old Orhewere was crushed to death by a reckless commercial driver, who fled the scene instantly

The driver reportedly left the bus and absconded from the scene of the accident. While some of the victim’s colleagues were busy saving his life, others were in a hot chase after the fleeing driver who just crushed the father of seven. From what we gathered, the policeman suffered from a broken spinal cord and waist. Consequently, he died right on the spot while his colleagues were unable to apprehend the fleeing driver.

>>> See another instance a Policeman faced the destruction of property and threat to life: [Video] University students violently destroy a SARS Officer’s car in Ogun State

The victim, who was identified as Orhewere, was killed due to reckless driving on the driver’s part. His remains have been taken and deposited at the mortuary in Badagry General Hospital.

“We were at the checkpoint in Agbara and saw the policeman and his colleagues watching over the area, which is always crowded. There had been a lot of reckless driving around the area because it was a festive period. So, while they were at their duty post, in a split second, the LT commercial bus rammed into the policeman.

“When we got there, we saw that the iron rod in front of the bus pierced through his waist and he sustained very deep wound in his waist. His spinal cord was broken due to the impact of the crash and he died on the spot. After the accident, the driver of the bus abandoned the vehicle and ran away.”

Fortunately, the owner of the bus used in crushing the police officer was traced and apprehended by the police. He gave them the address of the driver during interrogation but when the police got to his house, the driver and his family had left the house. 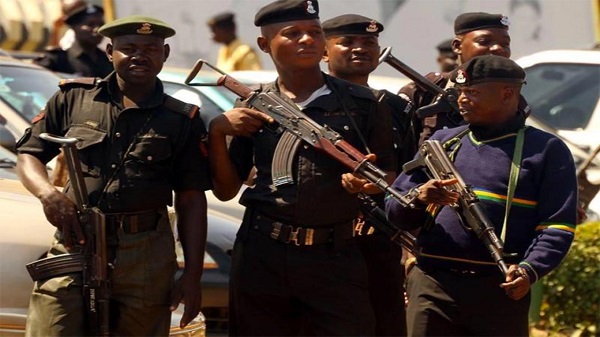 The family members of the victim including his daughter, Patience, have been thrown into huge sorrow and hardship since Orhewere was the breadwinner, catering for the needs of his entire household. The state Police PRO, Bala Elkana, when contacted, made it known that the police force had started a manhunt for the commercial bus driver, who has been on run ever since.

“This is part of the hazards that police personnel face on the job every day, while carrying out their duties of protecting lives and properties as enshrined in the Constitution. It is either a policeman is killed by an armed robber or crushed by a vehicle while carrying out his lawful duty. These are some of the issues that most times Nigerians never get to know.

“The Commissioner of Police, Hakeem Odumosu, is in pain for losing a policeman at this time that we need him the most; so, we mourn his passage. The police have a policy of giving a policeman, who died in the line of duty, a befitting burial and also his family can start processing his benefits after the mourning period.

“We have launched an investigation into the case and also launched a manhunt for the fleeing driver in a bid to track him down so that he can be prosecuted and justice is served.”