6-month heavyweight champion Andy Ruiz might have suffered defeat in the hand of Anthony Joshua but he sure enjoyed his short term reign. See how!

The 6-month heavyweight boxing champion Andy Ruiz might have been defeated by Anthony Joshua in Saudi Arabia, but he sure enjoyed the luxury that comes with being a champion even though it was for a short while.

Andy Ruiz was captured with his wife on a borrowed Rolls Royce, touring the town with 2 of his belts

Andy Ruiz Jr, popularly called ‘The Destroyer’ is the current Mexican boxing champion. He made a shocking revelation after his last and famous defeat that he consumed everything that came his way without putting his best to the training for the fight ahead.

Ruiz further gave an insight on the reason for his below-par performance while speaking to TMZ Sports.

“I think I ate everything… EVERYTHING… that’s why I gained so much weight.

“But, I wish I had taken it more serious.”

It looks like the Mexican champion isn’t ready to back down yet from the defeat as he disclosed he would relish the chance to have another go at the current heavyweight champion.

“For the third fight, I’m going to give it all I got! I want those belts back!”

Andy Ruiz and his wife, after defeating Anthony Joshua six months ago, flaunted 2 of his 4 belts atop a leased Rolls Royce, to more than one-third of 17500 people, which is the population of the town. The 6-month heavyweight champion made a whopping £6.5 million (₦2.9b) from the prominent fight with British Anthony Joshua. He recently disclosed the very first thing he acquired with the cash.

The Mercedes G550 SUV was one of the four luxury cars Andy acquired with the money from fighting A.J

“First of all I bought a car for my mum,”

“That was the first purchase that I made with the money that I got.

“I bought my mum a car because I messed up a lot of her cars when I was young. So I got her a brand new car.”

He also got his dad a new truck and paid cash of $1 million (₦362.5m) to acquire a new home. He, however, made it known that his craziest act was the acquisition of four luxury cars.

>>> His rival is also obsessed with exotic cars: Unique Anthony Joshua’s car collection: impressive in its own way

“My maddest purchase is probably all of the cars that I bought.

“I bought four cars, two types of Mercedes G-Wagons, the brand new Rolls Royce and a Lamborghini truck, an SUV.

“My spending has not taken my competitive edge off.”

His father, Ruiz Sr, wasn’t really happy with him when he acquired the white Rolls Royce Wraith.

“Like a father, I told him to stay humble – don’t spend the money, invest it in houses,”

Despite his father’s warning, Andy Ruiz still went ahead to acquire a Mercedes G550 SUV worth $100,000 (₦36.25m). He was recently captured on camera pulling on this luxury car to his driveway, where he said: “another one” with a smile on his face. 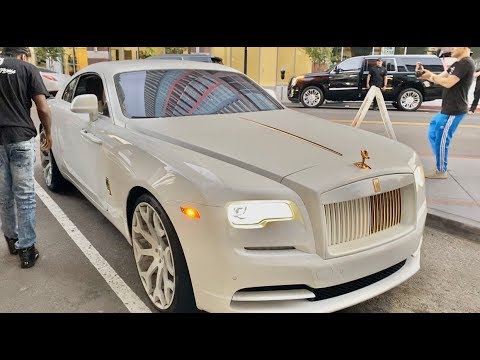 Just at the beginning of December, the Mexican paid a whopping $325,000 for the delivery of Rolls-Royce Cullinan SUV, a new addition to his expensive car collection.

Do you think Andy Ruiz is being wasteful?

>>> Catch up on other car celebrity news, gist and updates here on our news section by Naijauto!

Brazil legend Ronaldinho net worth, cars and houses in 2021

The asset values of these richest banks in Nigeria will blow your mind!