AKTC Transport is one of the leading state owned transport companies. If you are going to travel with AKTC transport, make sure to look through our AKTC price list 2020 and terminals in Nigeria!

Akwa Ibom Transport Company AKTC was a state owned transport company until it was leased out to a private firm in 2005. Nsik Motor took over control of AKTC after emerging as preferred company after a very competitive bidding process. Nsik Motors the operators of AKTC is a transport management company that was incorporated in 2003 by its Director Mr. Nsikak Johnny. The company before taking over control of AKTC was the sole operator of the company’s Uyo to Port Harcourt route, an arrangement which was so successful that it laid the solid foundation for an easy win at the lease Bid process of 2005. 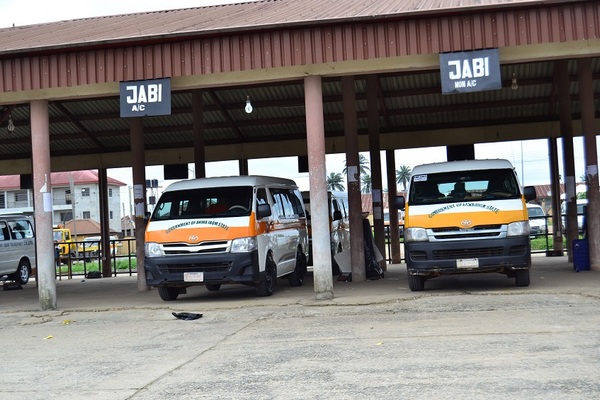 The company runs a fleet of buses that are sound and road worthy. AKTC buses are mostly JinBei Buses manufactured by Chinese automaker Shenyang Brilliance Jinbei Automobile Company. Nsik Motors happens to be a sole distributor of the company’s buses and spare parts in Nigeria. Their buses are generally in good state and are fitted with electronic speed limiters especially for the buses plying Lagos, Oyo, Abuja and Northern routes. The company’s drivers are professional and safety conscious and the company's buses have very low acccident rate.

The company’s Logistics subsidiary, AKTC Logistics delivers luggage and loads weighing more than 10 kg to all cities within the company’s travel route.

The company also offers Direct to NYSC Camp services for prospective corp members at an affordable rate for corpers travelling from the south to northern Nigeria. This helps reduce the stress and sense of uncertainty experienced by corpers when trying to locate their camp. The prices are hugely subsidized for corpers and safety is upheld to the highest degree during the trip. 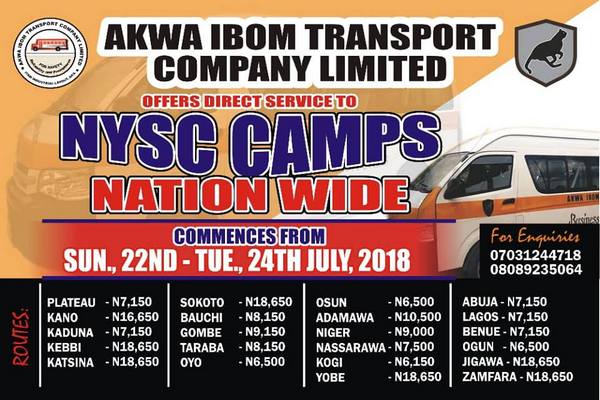 2018 flyer for Direct to Camp Bus service for Corpers

AKTC initially plied just major routes, but in recent times has extended it reach and have added new routes to its portfolio. The transport company generally operate one terminal per city with departure time from 6.00 am-6.45 am. The table shows AKTC Transport fares for each route:

AKTC runs a manual booking system on like other transport companies that are moving online and offering electronic and online booking. However, the company offers limited electronic payment specifically POS payment using your ATM card. You can easily make cash bookings over the counter at AKTC terminals just before your trip. The company also allows advanced booking for selected routes.

AKTC has several terminals spread across the country. With terminals heavily populated in the southern part of the country. Check the table below for more details on terminals and their contact address.

Mr. Nsikak Johnny is the founder and Director of Nsik Motors Nigeria Limited. Nsik Motors currently hold the sole lease right to operate AKTC PLC across the country. Nsikak Johnny started off from a low and steadfastly worked his way to the top. His humble beginning as an Okada rider spurned off to the mega transport brand we now today. While operating his Okada business, Nsikak discovered a strong need for other transport services especially bus city shuttle. Following through on this, Mr. Nsikak purchase a fairly used bus and began operating within Port Harcourt city.

Building on the momentum and experience of operating the city shuttle business, Nsikak was a real need to enter the interstate transport sector. This he did some years later when he purchase one more fairly used bus and began plying the Port Harcourt – Uyo route. The story beyond this point is that of an astute business man, that built his business to what it is today.

AKTC has maintained its reputation as a reliable transport company in Nigeria. We at Naijauto don't have any issue recommending this service to our readers, at least their buses are in good shape and their drivers are experienced people. However, if you looking for some plush and super executive bus service, then AKTC might not offer that. Companies like ABC and GIGM are far ahead in that area.

Other transport companies you want to consider:

>>> Don't forget to come back to Naijauto.com for more information for safe transportation in Nigeria!